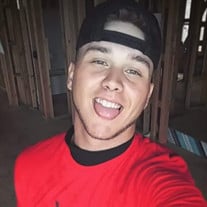 Aaron Michael Land was born on March 5, 2000, in Rolla, Missouri to Christopher Michael and Anita Kay (Ferguson) Land and passed away on June 12, 2020, in Rolla, Missouri at age of twenty years. Aaron grew up in Salem, Missouri and graduated with the Class of 2018 from Salem High School. Aaron worked several jobs and most recently was doing residential and commercial construction with Landmark Fine Homes. Aaron enjoyed listening to music and singing, he liked to fish and ride his dirt bike. Aaron was fun-loving and one of a kind who loved having a good time. He was known as a jokester who could have you laughing in an instant. Aaron enjoyed hanging out with his friends but deeply treasured the time spent with his family. Aaron is survived by his loving parents: Anita Ferguson of Salem, MO and Mike and Michal Land of Norman, OK; siblings: Cody Land of Salem, MO, Lucy Land of Norman, OK, Collin Land of Norman, OK, Eli Land of Norman, OK, Tyler Land of Springfield, MO, and Courtney Clucas of Delaware; grandparents: Tina Hutchens of Salem, MO, Dennis and Tina Land of Salem, MO, and Bob and Jana Christian of Norman, OK; as well as several aunts, uncles, cousins, other relatives and friends. Preceding him in death, his grandmother: Arlene Davis. Aaron will be remembered for his kind heart and humble spirit. His beautiful smile will never be forgotten. He will be deeply missed. Funeral Services for Aaron Michael Land were held Tuesday, June 16, 2020 in the Wilson Mortuary Salem Chapel with Bob Christian officiating. Memories were shared by family and special music was provided. Serving as Pallbearers were Cody Land, Tyler Land, Isaac Stogsdill, Caleb Lerna, Charlton Lerna, and Colton Lerna. Honorary Pallbearers were Jon Christian and Isaac Christian. Burial was in the Boss Cemetery. Arrangements were under the direction of Wilson Mortuary of Salem, Missouri. Memorial Contributions may be made in memory of Aaron Michael Land and left at Wilson Mortuary. Online condolences may be entered at www.wilsonmortuary.com

The family of Aaron Michael Land created this Life Tributes page to make it easy to share your memories.