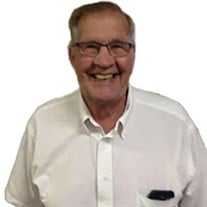 Alfred Edward Jacobs was born May 22, 1937, in Kirkwood, Missouri to Arthur William and Dorothy Gertrude (Miller) Jacobs and passed away April 17, 2020, surrounded by his family at his home in Salem, Missouri at the age of eighty-two years. Al grew up in Kirkwood, Missouri where he attended Lutheran Schools. During his junior year his family moved to the Sligo area where Al attended school in Cherryville. He started his college career at the University of Missouri where he met the love of his life, Beverly Ann Sample. On September 5, 1959, they were united in marriage. Together they shared sixty years of marriage and were blessed with four children: Dawn, Karl, Toni, and Lisa. For the majority of his working career, Al was a cross country pipeline welder. This job allowed him to show his family most of the country during their summer vacations. Al took part in many projects during his lifetime. When he worked for McDonnell Douglas he worked on the Gemini Project. As a welder, he worked on the Alaskan Pipeline. Al then decided to pass on his trade. He went back to the University of Missouri to become a teacher. He graduated from UMC in 1986. Al loved both flying and canoeing. He was a member of the Airport Board in Salem and a longtime member of Salem Lutheran Church. He enjoyed giving back to the community and was a part of the Patriot Paws program. He frequently visited the Missouri Veterans Home in St. James with his dog, Chloe. Al was very patriotic and enjoyed conversation in politics. He was an intelligent man that initiated thought-provoking conversation and gifted his companions with interesting tidbits of knowledge. Most of all, Al was very passionate about his family. He loved them dearly and cherished the time spent with them, especially his grandchildren and great-grandchildren. Al is survived by his loving wife: Beverly (Sample) Jacobs of the home; three children: Karl Jacobs and wife Karla of Salem, MO, Toni Lewis of Salem, MO, and Lisa Ott and husband Eugene of Baltimore, MD; one brother: Bill Jacobs and wife Anna of Tuscan, AZ; six grandchildren: Kyle Jacobs, Katie Shaffer and husband Corey, Brad Lewis and wife Allison, Andrew Lewis and wife Ashley, Catherine Ott, and Liz Ott; nine great-grandchildren; as well as several aunts, uncles, cousins, nieces, nephews, extended family, and friends. Preceding him in death were his, daughter: Dawn Denise Jacobs; parents: Arthur and Dorothy Jacobs; and son-in-law: Larry Lewis. Al will be remembered for the love he had for his family and friends. He will be deeply missed but fondly remembered by all who knew and loved him.

Alfred Edward Jacobs was born May 22, 1937, in Kirkwood, Missouri to Arthur William and Dorothy Gertrude (Miller) Jacobs and passed away April 17, 2020, surrounded by his family at his home in Salem, Missouri at the age of eighty-two years. Al... View Obituary & Service Information

The family of Alfred Edward Jacobs created this Life Tributes page to make it easy to share your memories.

Send flowers to the Jacobs family.