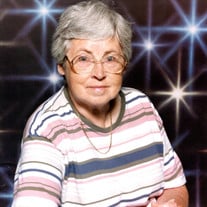 Alice Lucinda (McCarter) Taylor was born April 3, 1936 in Turtle, Missouri to George and Fannie (Brooks) McCarter and departed this life November 26, 2021 at the age of eighty-five years. Alice was united in marriage to Everett Royal Taylor and to this union blessed with three children: David, Dennis, and Diane. She was a loving mother and worked hard to provide for her family. Alice dedicated her life to serving others as a home health caregiver for twenty-five years. In her spare time, Alice enjoyed spending time outdoors enjoying nature. She loved taking walks around the neighborhood and watching the birds. Alice was a woman of strong faith and loved reading and studying the Bible. Most important to her was her family, she valued making memories with them, especially with her grandchildren and great-grandchildren. Alice leaves behind to cherish her memory, sons: David Taylor and Dennis Taylor; daughter: Diane Taylor-Jennings; many grandchildren and great-grandchildren; brothers: Albert McCarter and Bill McCarter and wife Barbara; as well as a host of nieces, nephews, cousins, other relatives, and dear friends. Preceding her in death, parents: George and Fannie McCarter; brothers: Wilbur McCarter and wife Duva, and Vernon McCarter; sister: June Black; sister-in-law: Freda McCarter; an infant sibling; and father of her children: Everett Royal Taylor. Alice had a heart of gold and will be remembered for her kindness and friendly smile. She touched the lives of many and will be forever missed. Funeral Services for Alice Lucinda (McCarter) Taylor were held Thursday, December 2, 2021 in the Wilson Mortuary Salem Chapel with Pastor Travis Goosey officiating. Song selections played were “I’ll Fly Away”, “Old Rugged Cross”, “Softly and Tenderly”, “Love Lifted Me”, “Peace In The Valley”, and “Go Rest High On That Mountain”. Serving as Pallbearers were Jason Jennings, Jacob Taylor, Scott Wohlgemuth, Paul Howerter, Travis Goosey, and Aaron Steelman. Honorary Pallbearers were Megan Jennings and Suzanne Jennings. Burial was in the Cedar Grove Cemetery. Arrangements were under the direction of Wilson Mortuary of Salem, Missouri. Condolences may be left at www.wilsonmortuary.com

Alice Lucinda (McCarter) Taylor was born April 3, 1936 in Turtle, Missouri to George and Fannie (Brooks) McCarter and departed this life November 26, 2021 at the age of eighty-five years. Alice was united in marriage to Everett Royal Taylor... View Obituary & Service Information

The family of Alice Lucinda (McCarter) Taylor created this Life Tributes page to make it easy to share your memories.

Send flowers to the Taylor family.