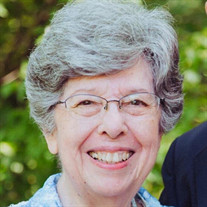 On May 26, 1945 Alyce was born in Houston, Texas to her mother, Veda Lorene Larez and father Pat McBee and her brother, Joe Pat. She spent her first few years in the Oklahoma towns of Clayton and Dell City. The post war period was a time of peace and happy times. Alyce would share her memories with her family of the “rough” living conditions in Clayton. These included “outhouses”, a cast iron pot in the yard for the laundry and the water source being a “well” in the yard. Her father moved the family to a new home in Dell City in the late forties. She would recall in her youth going to the local movie with her friends and the extravagance of spending 25 cents for the show and a treat. A time of great sadness was the loss of her father in an industrial accident in 1951. In the early 50’s her mother married Rudy Larez and they moved to Midwest City. When her brother Mark Larez was born. She began to develop her mothering skills as she shared in the care of Mark. In the late 50s the family moved to Grandview, Missouri when Rudy was stationed at Richards-Gebaur Air Force base. Alyce was a majorette in the high school band and excelled in handling a batton. During her senior year she had a light class load and took the opportunity to take a job at Dorothy’s Laundry. One day in December 1963 a young man named Oscar came into the laundry. That afternoon he came in twice more and they never looked back. After 3 years of unbroken partnership they were joined in what would be a 54 year marriage. Their relationship was characterized by 57 years of never having a harsh word pass between them. The first five years of marriage was a time of work to support the family as Oscar completed his engineering education. Alyce worked as a bookkeeper for MFA until the birth of Michael (1968). Next came a move in 1969 to St. Louis and then to KC as Oscar began a 30 year career with Southwestern Bell (AT&T). Also in 1969 Oscar was called to active duty in the Army. Alyce was carrying baby David as he went to Vietnam for a year. Upon his return Alyce gave birth to Patrick (1975). After another move to St. Louis Matthew was born (1977). During the next 30 years Alyce would see the birth of 14 grandchildren and 8 great grandchildren. Alyce had amazing mothering instincts. She could calm a crying baby or guide a strong willed teenager. One of her main rules for raising boys was “raise boys to be men.” She loved her four sons dearly. And, she watched with great pride as they grew into manhood and became husbands and fathers. Her devotion to church and teaching children about Jesus was an example for all. One of the successful innovations was the “Backyard Bible Club.” She both held them and recruited others. To this day the neighborhood kids, now grown, see her as an example and a speaker of truth in love. Alyce is survived by her loving husband: Oscar McNeil Jr. of the home; sons: Michael McNeil and wife Lynn of Crestwood, MO, David McNeil Sr. and wife Dorothy of O’Fallon, MO, Patrick McNeil and wife Angela of St. Charles, MO, and Matthew McNeil and wife Danita of St. Charles, MO; grandchildren: Christian Krabbe and husband Joe, Sindie Warren and husband Justin, Conner McNeil and wife Brianna, David McNeil and wife Meghan, Jacob McNeil, Caleb McNeil and wife Hannah, and Luke, Adam, Anna, Benjamin, Jack, Maizy, Austin, and Ayden McNeil; great-grandchildren: Elijah, Ava, Cora, Lily, Jayce, Zailey, Isaiah, and Gwen; brother: Mark Larez and Jeremy; father-in-law: Oscar McNeil Sr.; extended family and friends. Preceding her in death were her parents; step-father: Rudy Lorez; mother-in-law: Gertrude McNeil; brother: Joe Pat McBee and wife Martha Ann; and granddaughter: Allyson McNeil. Funeral Services for Alyce Marie (McBee) McNeil were held Thursday, June 11, 2020 in the Wilson Mortuary Salem Chapel with Pastor Michael Peters officiating. Conner McNeil led the congregation in “I’ll Fly Away” and Brianna McNeil provided special music. Memories were shared by Oscar McNeil and boys. Serving as Pallbearers were Michael McNeil, David McNeil Sr., Patrick McNeil, and Matthew McNeil. Honorary Pallbearers were Michael Conner McNeil, David McNeil, Jack McNeil, and Austin McNeil. Burial was in the Cedar Grove Cemetery. Arrangements were under the direction of Wilson Mortuary of Salem, Missouri.

On May 26, 1945 Alyce was born in Houston, Texas to her mother, Veda Lorene Larez and father Pat McBee and her brother, Joe Pat. She spent her first few years in the Oklahoma towns of Clayton and Dell City. The post war period was a time of... View Obituary & Service Information

The family of Alyce Marie (McBee) McNeil created this Life Tributes page to make it easy to share your memories.

Send flowers to the McNeil family.