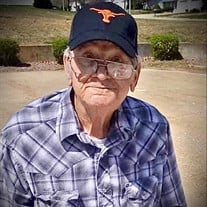 Amos Lee Harber was born on March 20, 1939 in Arbyrd, Missouri to Winslow Amos and Estelean (Morrow) Harber and passed away on October 12, 2020 in Salem, Missouri at the age of eighty-one years. Amos grew up and attended school in the St. Louis Area. He began his working career at a young age; at sixteen he started working for General Motors. Amos entered the United States Navy on January 17, 1963 and served his country faithfully until his honorable discharge on January 16, 1965. During his time in the military, Amos was aboard the USS Barton during the Naval Blockade of Cuba in 1963. Amos was united in marriage to the love of his life, Anna Belle Chitwood, on September 3, 1963 and together shared fifty-five wonderful years before her passing on October 16, 2018. Amos and Anna were blessed with one son, John, whom they were very proud of. Amos was a Real Estate Broker for many years. He started with Armbruster Realty and eventually owned and operated, before selling and moving to Salem. Amos has enjoyed the retired life for about eighteen years. He enjoyed spending time on his farm raising cattle. Amos loved going to auctions, flea markets, and yard sales; always wheeling and dealing and finding treasures. Amos is survived by his son: John Harber and wife Sheila of Fenton, MO; sister: Carol of St. Louis, MO; brother: Mark of St. Louis, MO; and many other relatives and friends. Preceding him in death, his loving wife: Anna Belle Harber; parents: Winslow and Estelean Harber; and brother: Ronald Harber. Amos leaves behind a legacy of love and friendship and will be forever missed by all who knew and loved him. Funeral Services for Amos Lee Harber were held Saturday, October 17, 2020 in the Wilson Mortuary Salem Chapel with Pastor Chris Hendrix. Song selections played were “Like A Rock”, “I Want To Stroll Over Heaven With You”, “Love Without End Amen”, and “Go Rest High On That Mountain”. Serving as Pallbearers were Jay Clark, Rob Flesch Jr., Joe Brown, and James Brown. Burial was in the Chitwood Cemetery, Ellington, Missouri. The Family was served by Wilson Mortuary of Salem, Missouri. Memorial Contributions may be made in memory of Amos Lee Harber to Salem Residential Care and left at Wilson Mortuary. Online condolences may be entered at wilsonmortuary.com

Amos Lee Harber was born on March 20, 1939 in Arbyrd, Missouri to Winslow Amos and Estelean (Morrow) Harber and passed away on October 12, 2020 in Salem, Missouri at the age of eighty-one years. Amos grew up and attended school in the St. Louis... View Obituary & Service Information

The family of Amos Lee Harber created this Life Tributes page to make it easy to share your memories.

Send flowers to the Harber family.