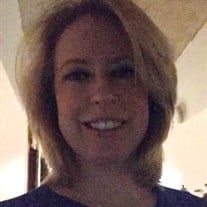 Andrea Yvonne Cowan was born on August 8, 1978, in Rolla, Missouri to James and Doris (Bergman) Cowan and passed away March 20, 2020, surrounded by her loving family at her home in the Salem, Missouri at the age of forty-one years. Andrea grew up in Salem and graduated with the Class of 1996 at Salem High School. After graduation, she furthered her education earning her Real Estate Broker License and a Certificate in Accounting. Andrea was a hard-worker and very knowledgeable about what she was doing. Throughout her working career, she was employed with Wal-Mart, D2D Enterprises, and Ford Dealership. Andrea also worked alongside her brother as a lock smith with Rommel's Lock and Alarm. She was a kind and loving person, with a heart of gold and a desire to help others in the community. Andrea enjoyed playing on coed softball and volleyball leagues. She was strong, full of ambition and had a determined mind. Andrea could do anything she set her mind to. She loved spending time outdoors whether it was tending to the garden, walking the farm to clear her mind, or shooting. Andrea was always surrounded by family and friends and enjoyed life to the fullest. She was one of a kind, with a big heart full of love and compassion. Andrea cherished the time spent with her family, especially her nieces and nephews; she was highly involved in their lives. Andrea had a sweet admirable spirit and was strong in her faith. She accepted Christ at Victory Baptist Church and later rededicated her life at Oak Grove Baptist Church. Andrea was a part of the Women’s Auxiliary with American Legion Post 99. Her passion was giving to others with her time and thoughtfulness, everyone knew her to be generous, positive and uplifting. Andrea is survived by three siblings: Carla Bush and husband Stephen of Springfield, MO, Rommel Cowan and wife Renea of Salem, MO, and Wellan Cowan and wife Christine of Kansas City, MO; nieces and nephews: Rachel Bush of Oklahoma City, OK, Amy McIntosh and husband Tony of Springfield, MO, Desiree Cowan of North Carolina, Nicholas Cowan of Rolla, MO, Te'a Cowan of Salem, MO, Shea Cowan of Kansas City, MO, and Finn Cowan of Kansas City, MO; as well as several aunts, uncles, cousins, extended family and friends. Preceding her in death were, her parents James and Doris Cowan, grandparents, and Aunt Betty. Andrea will be remembered as a dedicated daughter, sister, and best friend to many. Her witty sense of humor, joyous spirit, and contagious laugh will never be forgotten. Andrea leaves behind a legacy of strength, courage, dignity, and devotion. To know her was to truly love and admire her. Funeral Services for Andrea Yvonne Cowan were held Saturday, March 27, 2020 in the Wilson Mortuary Salem Chapel with Pastor Lyndell Decker and Pastor Gaye Lynn Blankenship officiating. Song selections played were “When I Get Where I’m Going”, “I Can Only Imagine”, and “It Is Well”. Serving as Pallbearers were Nicholas Cowan, Brad Jadwin, Tony McIntosh, Gregg Durnbaugh, Jimmy Crain, and Brett Boulware. Honorary Pallbearers were Jerry Higgins. Burial was in the Carty Cemetery. Arrangements were under the direction of Wilson Mortuary of Salem, Missouri.

Andrea Yvonne Cowan was born on August 8, 1978, in Rolla, Missouri to James and Doris (Bergman) Cowan and passed away March 20, 2020, surrounded by her loving family at her home in the Salem, Missouri at the age of forty-one years. Andrea grew... View Obituary & Service Information

The family of Andrea Yvonne Cowan created this Life Tributes page to make it easy to share your memories.

Send flowers to the Cowan family.