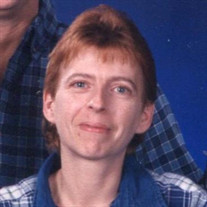 Angelika (Kohl) Johnson was born on March 29, 1962, in Germany. Her parents were Dieter Kohl and Margit Walter. She had one brother, Andreas Walter, and was raised in Germany by her loving grandparents Rudolf and Rosa Schneider. At the age of seventeen, Angelika met Bernard Thomas Shaffer while he was stationed in Germany. They were united in marriage and to this union blessed with three children: Jessica, Jamie, and Thomas. She moved to the United States in 1984 where she was a dedicated homemaker. Angelika took great pride in raising her family and caring for her home. On August 14, 1997, Angelika and Keith Johnson were united in marriage and shared nearly twenty-five years of memories. They made Jackson, Tennessee their home and were blessed with one daughter, Destiny. Angelika was an avid fan and supporter of Destiny’s time in karate and other interests. She enjoyed traveling to her events and was proud of her current college achievements. Angelika loved watching her daughters raise their families and seeing her grandchildren grow, she never missed an opportunity to brag about them. Angelika loved the outdoors, and just loved sitting and relaxing on her front porch with her fur babies. She enjoyed vacations to the beach and watching crime shows. Angelika departed this life on April 28, 2022, in Nashville, Tennessee at the age of sixty years. She leaves behind to cherish her memory, loving husband Keith Johnson of Jackson, TN; children: Jessica Hendrix and husband Chris of Salem, MO, Jamie Minor and husband Philip of Lebanon, MO, Thomas Shaffer of Jackson, TN, and Destiny Johnson of Jackson, TN; grandchildren: Dakoyta Hendrix, Scott Hendrix, Keelie Minor, Kirsten Mathers, Lizabeth Hendrix, and Payton Minor; extended family and dear friends. Preceding her in death, her parents: Dieter Kohl and Margit Walter, and grandparents: Rudolf and Rosa Schneider. Angelika will be deeply missed but fondly remembered by those who loved her most. Online Condolences may be entered at www.wilsonmortuary.com

Angelika (Kohl) Johnson was born on March 29, 1962, in Germany. Her parents were Dieter Kohl and Margit Walter. She had one brother, Andreas Walter, and was raised in Germany by her loving grandparents Rudolf and Rosa Schneider. At the age... View Obituary & Service Information

The family of Angelika Johnson created this Life Tributes page to make it easy to share your memories.