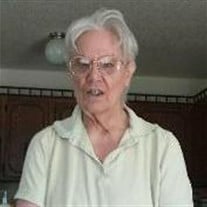 Anna Mae Click was born April 11, 1946 in Pampa, Texas to Richard Lee and Virgie (Huskey) Pax and passed away August 5, 2018 in Salem, Missouri at the age of seventy-two years. On February 25, 1978, Anna Mae Pax was united in marriage to... View Obituary & Service Information

The family of Anna Mae "Ann" Click created this Life Tributes page to make it easy to share your memories.