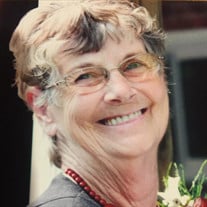 Barbara Ann (Wells) Land was born on January 14, 1941, in Hooker, Missouri to Clarence and Ruth (Rolufs) Wells and passed away on January 2, 2021, in Licking, Missouri at the age of seventy-nine years. Barbara grew up in Lenox, Missouri and graduated with the Class of 1958 from Licking High School. While in school, she enjoyed playing volleyball, cheering, and was crowned queen. At the age of fifteen, Barbara met the love of her life, David “Buddy” Land and on January 4, 1958 they were united in marriage at the home of Walter Jenkins in Salem, Missouri. Together Barbara and Buddy shared sixty-three years of memories and were blessed with two children, Timothy and Annette. Barbara was a hard worker and began her long working career as a seamstress in several factories between Salem and Licking. She was known as the fastest hemmer around with the ability to sew anything. Barbara truly liked working with her hands and retired after fifty years. In her spare time, Barbara enjoyed spending time outdoors at the river trout fishing. She had a passion for horses and showed, bred and sold quarter horses. In her younger years, she was a member of the Salem Saddle Club and enjoying riding the trails in Eminence. Barbara was a devoted wife and caring mother. Her family was important to her and she cherished the time spent with them, especially with her grandchildren and great-grandchildren. Barbara treasured the memories they made together. Barbara is survived by her loving husband David “Buddy” Land of Salem, MO; children: Tim Land and wife Paula of Salem, MO and Annette Vest and husband Terry of Salem, MO; sister: Pam Walker of St. Louis, MO; grandchildren: Amber Yates and husband Miles, Britney Christesen and husband Phil, Shauna Camden and husband Klay, and Briana Thompson and husband Matt; great-grandchildren: Harley, Ella, Sawyer, Emeri, Parker, Drew, Will, Luke, and Cora; as well as a host of nieces, nephews, cousins, other relatives, and friends. Preceding her in death, her parents: Clarence and Ruth Wells; and siblings. Barbara lived life to the fullest and will be dearly missed by all who knew and loved her. Graveside Services for Barbara Ann (Wells) Land were held Tuesday, January 5, 2020 at the Mt. Hermon Cemetery with Pastor Lyndell Decker officiating. Serving as Pallbearers were Terry Vest, Miles Yates, Klay Camden, Phil Christesen, Drew Christesen, and Will Christesen. Arrangements were under the direction of Wilson Mortuary of Salem. Missouri. Memorial Contributions may be made in memory of Barbara Ann Land and left at Wilson Mortuary. Online condolences may be entered at wilsonmortuary.com

Barbara Ann (Wells) Land was born on January 14, 1941, in Hooker, Missouri to Clarence and Ruth (Rolufs) Wells and passed away on January 2, 2021, in Licking, Missouri at the age of seventy-nine years. Barbara grew up in Lenox, Missouri and... View Obituary & Service Information

The family of Barbara Ann (Wells) Land created this Life Tributes page to make it easy to share your memories.