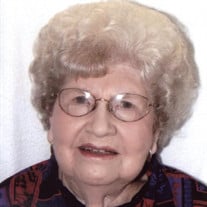 Berniece (Stephens) Steelman was born on January 28, 1925, in Salem, Missouri to Joseph “Alfred” and Audrey (Pewitt) Stephens and passed away April 20, 2020, in Salem, Missouri at the age of ninety-five years. Berniece grew up in Salem and graduated with the Class of 1942 at Salem High School. She married the love of her life, Harold Wilbur Steelman on June 13, 1942, and together they shared sixty-nine years of marriage before his passing on December 17, 2011. Harold and Berniece were blessed with two sons: Loyal and Keith. During her working years, Berniece worked at the International Shoe Factory. She took great pride in caring for her family and was known for her generous hospitality. Berniece enjoyed spending time in the kitchen cooking and baking for her family and friends. She always had plenty of snacks in her home and candy in her purse. Berniece enjoyed life to the fullest and had an eye for fashion. There was never a time you’d see Berniece out and about that she wasn’t dressed to impress, and you were always greeted with a warm smile. Strong in her faith, Berniece was a soft-spoken, sweet-spirited person with a servant’s heart. She was passionate about giving to others with her time and thoughtfulness. Berniece was a godly role model and a long-time dedicated member of Corinth Baptist Church. She treasured her time working in the church nursery and was known to everyone as Grandma. Berniece loved her family deeply and enjoyed family get-togethers; there was no place she’d rather be than spending time with them. She loved being a grandmother and cherished the time spent with her grandchildren and great-grandchildren. Berniece is survived by two sons: Loyal Steelman and wife Jane of Rolla, MO and Keith Steelman and wife Annette of Salem, MO; five grandchildren: Darren Steelman and wife Jennifer, Matt Steelman and wife Jenny, Jeremy Steelman and wife Kim, Chad Steelman, and Tyler Steelman and wife Gabi; eleven great-grandchildren: Benjamin, Seth, Abbie, Royal, Jasper, Oakleigh, Christian, Maylee, Knox (on the way), Delilah, and Ledger; extended family and friends. Preceding her in death were, her loving husband: Harold Wilbur Steelman and her parents Alfred and Audrey Stephens. Berniece leaves behind a legacy of love, dignity, and devotion. To know her was to truly love and admire her. She will be remembered for her contagious smile and sweet personality. Funeral Services for Berniece (Stephens) Steelman were held Monday, May 4, 2020 in the Wilson Mortuary Salem Chapel with Bro. Dwayne Cartwright and Scott Shults officiating. Special Music was provided by Berl Bays, Darren Steelman, Ben Steelman, Seth Steelman, Tyler Steelman, Mark Mathes, Michelle Pyatt, and Annette Steelman. Serving as Pallbearers were Darren, Tyler, Matt, Christian, Jeremy, Benjamin, Chad, and Seth Steelman. Honorary Pallbearers were Royal, Jasper, and Ledger Steelman. Burial was in the Dry Fork Cemetery. Arrangements were under the direction of Wilson Mortuary of Salem, Missouri. Memorial Contributions may be made in memory of Berniece Steelman to Corinth Baptist Church and left at Wilson Mortuary. Online condolences may be entered at wilsonmortuary.com

Berniece (Stephens) Steelman was born on January 28, 1925, in Salem, Missouri to Joseph &#8220;Alfred&#8221; and Audrey (Pewitt) Stephens and passed away April 20, 2020, in Salem, Missouri at the age of ninety-five years. Berniece grew up in... View Obituary & Service Information

The family of Berniece (Stephens) Steelman created this Life Tributes page to make it easy to share your memories.

Send flowers to the Steelman family.