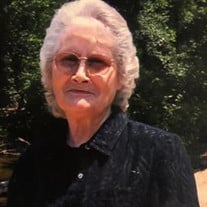 Betty Lou (Smith) Lewis was born on August 7, 1934, in Black, Missouri to Demcy and Cordella (Barton) Smith and passed away on March 1, 2020, at home surrounded by her loving family in Salem, Missouri at the age of eighty-five years. Betty grew up and attended school in Oates, Missouri. She met the love of her life, Perry Lewis, at the age of fifteen while attending The Little Browns Church. The two united in marriage on September 2, 1950 in Salem, Arkansas and together shared sixty-nine wonderful years of marriage and were blessed with four children: Terry, David, Scharlene, and Felecia. Betty considered herself a homemaker for the majority of her life and took great pride in caring for her family. She was a good cook who was well known for her potato salad and cherished family gatherings. Betty loved to sew and made several clothing items for her children as well as doll clothes. She had a green thumb and enjoyed her plants and flowers. Betty was a devoted Christian who supported her husband in his ministry and served her church in many capacities. She was an honorary member of Berryman Assembly of God and enjoyed worship there. Most of all, Betty treasured the time spent with her family especially her grandchildren and great-grandchildren. Betty is survived by her loving husband Rev. Perry Lewis of the home; four children: Terry Lewis of Newburg, MO, David Lewis of Rolla, MO, Scharlene Welch and husband Tom of Salem, MO, and Felecia Stienbarger and husband Jerry of Salem, MO; one brother: Harold Smith of Oates, MO; two sisters: Eunice Stallings and husband Jack of Salem, MO and Claudette Barton of Cherryville, MO; fourteen grandchildren; seven great-grandchildren; extended family and friends. Preceding her in death were, her parents: Demcy and Cordella Barton; siblings: Wanda Sheppard, Roberta Delashmit, Patsy Barton, Dejah Seute, Cullivan Smith, Verla Foster, Judy Smith, and two infant siblings. Betty was a sweet and gracious lady who will be deeply missed by all who knew and loved her. Funeral Service for Betty Lou (Smith) Lewis was held Friday, March 6, 2020 in the Wilson Mortuary Salem Chapel with Rev. Mick Thrasher officiating. Song selections played were “Old Rugged Cross”, “I Won’t Have to Cross Jordan Alone”, and “Never Grow Old”. Serving as Pallbearers were Terry Lewis, David Welch, David Lewis, Gabrial Lewis, Caleb Stienbarger, and Jacob Stienbarger. Honorary Pallbearers were Jack Stallings, Tom Welch, and Jerry Stienbarger. Burial was in the Smith Cemetery. Arrangements were under the direction of Wilson Mortuary of Salem, Missouri.

Betty Lou (Smith) Lewis was born on August 7, 1934, in Black, Missouri to Demcy and Cordella (Barton) Smith and passed away on March 1, 2020, at home surrounded by her loving family in Salem, Missouri at the age of eighty-five years. Betty... View Obituary & Service Information

The family of Betty Lou (Smith) Lewis created this Life Tributes page to make it easy to share your memories.