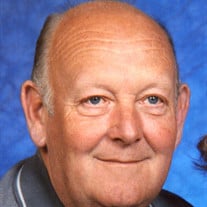 Army Veteran Billie "Bill" Clark Trask was born September 15, 1945 in Cherryville, Missouri to Clark and Anna (Sites) Trask and passed away August 9, 2019 surrounded by his loving family, at his home in Potosi, Missouri at the age of seventy-three years. As a young boy Bill grew up and attended school in Cherryville, Missouri and graduated with the Class of 1965. He accepted the Lord as his Savior at a young age while attending First Baptist Church of Cherryville. November 1965, Bill entered the United States Army and served his country faithfully until his Honorable Discharge in November 1967. During his time in the Military, he served during the Vietnam war as a Radio Operator calling in artillery and received the Bronze Star. Bill was united in marriage to the love of his life, Sharon K. Brakefield, on November 1975 at the First Baptist Church of Cherryville. Together they shared forty-three years of marriage and were blessed with three daughters: Andrea, Nicole and Kristina. Bill worked hard to provide for his family. He had various jobs through the years to include: carpentry, auto mechanic and heavy equipment mechanic. He loved to work on the farm where he raised cattle. Bill also liked buying old trucks or tractors and restoring them for his own use. In his spare time, Bill enjoyed his "News Sessions" around the Round Table at the Viburnum Inn along with his "Garage Sessions" with Chris Harmon. He was a member of Lebanon Lodge #77 of Steelville, Missouri. Bill's greatest pleasure in life was spending time with his family, especially his grandchildren Dylan and Braden. He was so proud of the men they have become. Bill is survived by his loving wife: Sharon Trask of Potosi, MO; three children: Andrea Miller and husband Tom of Wildwood, MO, Nicole Lizenbee and husband Mike of Viburnum, MO and Kristina Phares and husband Eric of Bismarck, MO; four grandchildren: Dylan Johnston, Jake Miller, Jazmin Phares and Braden Johnston; one brother: Robert Trask and wife Lorene of Little Rock, AR; one sister: Ruth Ann Halbert and husband Dan of Steelville, MO; three nephews: Mitch Huggins, Myron "Rastus" Halbert and Mike Halbert; extended family and friends. Preceding him in death were his parents and his brother, Clark Trask Jr. Bill was a wonderful husband, devoted father, loving grandfather and caring brother. He will be greatly missed by all those who knew and loved him. Funeral Service for Billie "Bill" Clark Trask was held Monday, August 12, 2019 at the First Baptist Church of Viburnum with Pastor Justin Perry officiating. Special music was provided by Ronnie and Lynn Chandler singing "God on the Mountain". Song selections played were: "God's Been Good" and "Go Rest High on that Mountain". Serving as Pallbearers were: Braden Johnston, Mike Lizenbee, Mike Halbert, Ratus Halbert, Chris Harmon, David Hopkins, Richard Cassidy and Shane Larue. Honorary Pallbearers were: Dylan Johnston and Mitch Huggins. Burial was in the Shoal Creek Cemetery with Military Honors provided by VFW Post 2025. All arrangements under the direction of Wilson Mortuary of Viburnum, Missouri.

Army Veteran Billie "Bill" Clark Trask was born September 15, 1945 in Cherryville, Missouri to Clark and Anna (Sites) Trask and passed away August 9, 2019 surrounded by his loving family, at his home in Potosi, Missouri at the age of seventy-three... View Obituary & Service Information

The family of Army Veteran Billie "Bill" Clark Trask created this Life Tributes page to make it easy to share your memories.

Send flowers to the Trask family.