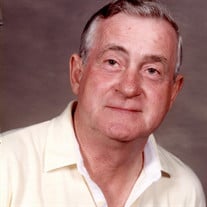 Billy “Bill” Wayne Decker was born on December 18, 1930, in Salem, Missouri to Jake and Mae (Medley) Decker and passed away on November 26, 2020 in St. Louis, Missouri at the age of eighty-nine years. Bill grew up in Bunker, Missouri and graduated from Salem High School. He entered the United States Navy, in 1947, at the age of seventeen and served his country faithfully for twenty years, retiring in 1967. For his honorable service, Bill earned many decorations, medals, badges, ribbons, and rewards to include: Good Conduct Medal, Navy Commendation Ribbon Bar, Korean Service United Nations, National Defense, and Navy Occupation Service Medal with Asia Clasp. Bill was united in marriage to the love of his life, Julia Elizabeth “Betty” Lynch on December 16, 1956 in West Virginia and together shared nearly sixty-five years of memories. Bill and Betty were blessed with four children, Michael, Susan, Teresa, and Edna. Bill was a loving and devoted husband to Betty and caring and dedicated father to his children. Outside his military career, Bill worked for several years as a night manager with IGA. Bill also worked as a car salesman with Ed Carmack at C&E Auto. In his younger years, Bill enjoyed shooting pool and playing horseshoes. Most important to him was his family and he truly cherished the memories they made together; especially with his grandchildren and great-grandchildren. Bill was a man of strong faith and an active member at Walking Faith Ministries. Not only did he enjoy the fellowship there, he enjoyed playing his guitar. Bill was a talented guitar player and loved to use his gift to glorify God. Bill is survived by, his loving wife: Betty Decker of the home; son: Michael Decker and Kristina of Salem, MO; daughter: Susan Decker-Key and Ken of Salem, MO; brothers: Harold Decker and wife Pat of St. Louis, MO and Jim Decker and wife Imogene of Salem, MO; sister: Erma Sue Gaddy of Salem, MO; grandchildren: Ashley Decker, Adam Decker, Eric Brokering and wife Crystal, Sean Cannefax, and Matt French; as well as many great-grandchildren, nieces, nephews, cousins, other relatives, and friends. Preceding him in death, daughter: Teresa French; infant daughter: Edna Rae Decker; and parents: Jake and Mae Decker. Bill leaves behind a legacy of love, dedication, and service. His memories will live on in the many lives he touched along the way. Bill will be forever missed. Funeral Services for Billy “Bill” Wayne Decker were held Wednesday, December 2, 2020 in the Wilson Mortuary Salem Chapel with Pastor Lyndell Decker officiating. Special Music was provided by pianist, Carol Carmack and soloists, Debbie Heck and Charlie Younger. Serving as Pallbearers were Ed Carmack, Jimmy Williams, Winferd Hutson, Adam Decker, Sean Cannefax, and Eric Brokering. Honorary Pallbearers were Jimmy Simpson, Paul Benson, and Damian Ayers. Burial with Military Honors was in the Cedar Grove Cemetery. Arrangements were under the direction of Wilson Mortuary of Salem, Missouri. Memorial Contributions may be made in memory of Bill Decker and left at Wilson Mortuary. Online condolences may be entered at wilsonmortuary.com

The family of Billy "Bill" Wayne Decker created this Life Tributes page to make it easy to share your memories.

Send flowers to the Decker family.