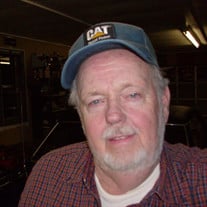 Billy “Bill” Wayne Lunn Sr. was born November 14, 1948 in Salem, Missouri to Clifford Ray and Opal Fay (Cooper) Lunn. He was raised in Salem and attended Salem High School. Bill tried to enlist in the Army during the Vietnam War but did not qualify. He then started his working career in St. Louis working for an electrical company before moving back and making Salem his home. Bill was blessed with two sons, Billy II and Clint. He was a loving, proud, and devoted father to his sons. Bill was united in marriage to Gale on November 9, 1996 in Salem, Missouri and to this union gained a daughter, Sam. Bill and Gale shared almost twenty-five years of memories together. Bill was a hard worker and started truck driving in the early seventies. He operated his own gravel business before starting his career with Craig Distributing, Kraft Foods, Alliant, and retiring from US Foods after thirty years of dedication. Bill was a “Chevy Man”, he was a car enthusiast and passionate about hotrods. He enjoyed working with his hands in the garage and has built a racecar and tinkered on several rat rods. One of his favorite things to do was watching “Motor Monday” every Monday night. Bill was a family man and loved spending time with his family. He loved to tell stories and making others laugh. He was a great man of faith and a member of Revival Tabernacle. Bill departed this life September 20, 2021 in Salem, Missouri at the age of seventy-two years. He leaves behind to cherish his memory his loving wife Gale Lunn of the home; sons: Billy Lunn II and wife Lisa of Salem, MO and Clint Lunn and partner Jennifer of St. Louis, MO; step-daughter: Sam Roberts and husband Phil of Holden, MO; brother: Leon Lunn and wife Rhonda of Arnold, MO; grandsons: Dalton Nash and Ryan Roberts and wife Kayla; special cousins: Bill Sentman and wife Linda of Salem, MO and Rose Dry of Salem, MO; beloved dog: Rocky; extended family and dear friends. Preceding him in death, parents: Clifford and Opal Lunn and an infant brother. Bill was a fine man, husband, father, grandfather, brother, and friend. He leaves behind a lasting impression that will not be soon forgotten. Funeral Services for Billy “Bill” Wayne Lunn Sr. were held Saturday, September 25, 2021 in the Wilson Mortuary Salem Chapel with Pastor Tim Hill officiating. Special Music was provided by Leland Ellerman singing “Long Black Train” and “409” and additional song selection played was “I Walked The Line”. Serving as Pallbearers were Billy Lunn, Clint Lunn, Eddie Wofford, Bob Nash, Josh Douglas, Dalton Nath, and Brandon Sentman. Honorary Pallbearers were Carl Midyett, Leland Ellerman, and George Dodson. Burial was in the Cedar Grove Cemetery. Arrangements were under the direction of Wilson Mortuary of Salem, Missouri. Memorial Contributions may be made in memory of Bill Lunn and left at Wilson Mortuary. Online Condolences may be entered at www.wilsonmortuary.com

The family of Billy "Bill" Wayne Lunn Sr. created this Life Tributes page to make it easy to share your memories.

Send flowers to the Lunn family.