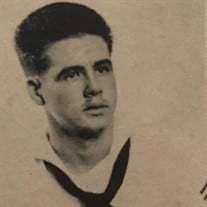 Billy Cleo Jadwin was born on August 4, 1939, in Jadwin, Missouri to Lester and Ava (Miller) Jadwin and passed away on May 18, 2020, in Salem, Missouri at age of eighty years. Bill grew up in Jadwin, Missouri where he attended school in a one-room schoolhouse. He later attended Salem High School. He entered the United States Navy on August 6, 1957 and served his country faithfully until his honorable discharge on August 11, 1961. Bill was united in marriage to Jean Cowan on August 28, 1965 in Salem, Missouri and together shared fifty-four years of marriage and were blessed with two children: Brad and Jill. Bill started his own business, "Jadwin Tree Service and Stump Removal" nearly forty years ago. His first tree trimming job was on his wedding day but he finished the job just in time to attend his own wedding. He also owned the "Big Barn Flea Market" which he ran for twenty plus years. Bill was involved with the demolition of some of Salem's prominent buildings through the years. Some of the buildings include Prestons Theater, the Dodge dealership, the Coca-Cola plant, and the Underwood House. Over the years, Bill cut lots of cordwood with his cousins, Clinton, Clifford, D.L., and Wayne Jadwin. He also partnered with Clinton Jadwin on land deals. Bill raised cattle and horses. He enjoyed horse shows and rodeos, and attended cross country trail rides for fifteen years. He loved to go to auctions and sales looking for a good deal on treasures, which he loved, especially his three blonde dolls. Bill was also interested in ancestry and was very knowledgeable on Jadwin history. He attended West Side Church of Christ and had a great love for the Lord. Bill loved to talk about politics to anyone who would listen. He was well known in the community and never met a stranger. He could be blunt and independent, he liked to tease, and he had a big heart. He loved and cherished his family but his granddaughters were "the apple of his eye". He was one of their biggest supporters in all their interests and academic accomplishments. Bill is survived by his loving wife: Jean Jadwin of the home; two children: Brad Jadwin and wife Lisa of Salem, MO, Jill Dean and husband Ross of Salem, MO; mother: Ava Jadwin of Salem, MO; three granddaughters: Savhanna Jadwin, Jodie Dean, and Isabella Jadwin; two sisters: Diana Jadwin of Salem, MO, and Leta Mae Hubbs of Salem, MO; two brothers-in-law: Jerry Higgins and wife Laura May of Rolla, MO, and Glenn Durnbaugh of Rolla, MO; many cousins, nieces, nephews, as well as many great great family members and many friends. Preceding him in death were his father: Lester Jadwin; father-in-law and mother-in-law: James and Myrtle Cowan: brother-in-law: Raymond Hubbs; brother-in-law and sister-in-law: Jim and Doris Cowan; sister-in-law: Betty Durnbaugh; niece: Andrea Cowan; and special cousin: Clinton Jadwin. Bill was a devoted husband, father, grandfather, son, brother, and friend. He will be deeply missed but forever remembered by all who knew and loved him. Funeral Services for Billy "Bill" Cleo Jadwin were held Saturday, May 23, 2020 in the Wilson Mortuary Salem Chapel with Pastor Lyndell Decker and Pastor Brian Smith officiating. Special Music was provided by Randy and Angie Hubbs. Serving as Pallbearers were Randy Hubbs, Derrick Hubbs, Zach Dunlap, Rommel Cowan, Gregg Durnbaugh, and Scott Jadwin. Honorary Pallbearers were Clifford Jadwin, Ed Carmack, Rick Anderson, and Jim Allen. Burial with Military Honors was in the Jadwin Cemetery. Arrangements were under the direction of Wilson Mortuary of Salem, Missouri. Memorial Contributions may be made in memory of Bill Jadwin to Salem FFA Alumni or Jadwin Cemetery and left at Wilson Mortuary. Online Condolences may be entered at www.wilsonmortuary.com

Billy Cleo Jadwin was born on August 4, 1939, in Jadwin, Missouri to Lester and Ava (Miller) Jadwin and passed away on May 18, 2020, in Salem, Missouri at age of eighty years. Bill grew up in Jadwin, Missouri where he attended school in a one-room... View Obituary & Service Information

The family of Billy Cleo Jadwin created this Life Tributes page to make it easy to share your memories.

Send flowers to the Jadwin family.