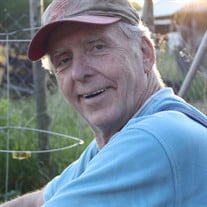 Billy Poindexter was born on August 1, 1942, in Pueblo, Colorado to Jack and Esther (Heydenreich) Poindexter. He spent his early years in Colorado before traveling the country doing a variety of work. Billy met the love of his life, Eloise Carol Evans, while in Wichita, Kansas, and on January 20, 1962, they were united in marriage. Billy and Eloise were blessed with four children: Kimberly, Billy, Wilson, and Taylor, and their family continued to grow with the addition of twelve grandchildren and eight great-grandchildren. Billy was proud of his family and enjoyed making his grand and great-grandchildren laugh. Billy and Eloise recently celebrated their 60th wedding anniversary with their family. Billy had a strong work ethic, which began at an early age, first washing dishes, then building silos, and later moving furniture. He worked hard to provide for his family. He was a truck driver for many years and enjoyed his travels on the open road. Billy and Eloise owned several farms throughout their marriage; he particularly enjoyed being outside, working on the farm, raising various kinds of animals, and spending time on his tractor. When not outside, he could be found in his recliner, reading the Weekly Trader and listening to Southern Gospel music. Billy was a man of faith and a member of Oak Grove Baptist Church for many years. He and Eloise later attended Salem First Baptist Church, singing in the choir and participating in church programs. Billy departed this life on May 16, 2022, in Salem, Missouri at the age of seventy-nine years. He leaves behind to cherish his memory, his loving wife Eloise Poindexter of Salem, MO; children: Kimberly Martin and husband Dwight of Falcon, MO, Billy Poindexter and wife Beth of Georgia, Wilson Poindexter and wife Kerry of Salem, MO, and Taylor Poindexter and wife Becky of Oklahoma; grandchildren: Blake Martin and wife Michelle, Derrick Martin, William Poindexter, James Poindexter, Stefanie Kinsey and husband Nathan, Kate Majerus and husband Micah, Evan Poindexter, Olivia Poindexter, Kellen Bloomer, Nathan Poindexter and wife Lindsey, Andrew Poindexter, and Emily Poindexter; great-grandchildren: Kylee, Wyatt, Sydnee, Tanner, Logan, Max, Ronen, and Oliver; brothers: Terry Poindexter, Jimmy Poindexter and wife Myra, and Mark Harris and wife Pam; as well as a host of nieces and nephews. Preceding him in death, father: Jack Poindexter; mother: Esther Harris; and brother: Gary Poindexter. Billy will be remembered for his big smile, firm handshake, distinctive voice, and strong work ethic. He will be deeply missed by those who loved him most. Funeral Services for Billy Poindexter were held Thursday, May 19, 2022 in the Wilson Mortuary Salem Chapel with Pastor Alex Busenitz officiating. Special Music was provided by Evan and Dixie. Serving as Pallbearers were Kellen Bloomer, Blake Martin, Derrick Martin, Evan Poindexter, Nathan Poindexter, Andrew Poindexter, William Poindexter, and James Poindexter. Burial was in the Cedar Grove Cemetery. Arrangement were under the direction and care of Wilson Mortuary of Salem, Missouri. Online Condolences may be entered at www.wilsonmortuary.com

Billy Poindexter was born on August 1, 1942, in Pueblo, Colorado to Jack and Esther (Heydenreich) Poindexter. He spent his early years in Colorado before traveling the country doing a variety of work. Billy met the love of his life, Eloise... View Obituary & Service Information

The family of Billy Poindexter created this Life Tributes page to make it easy to share your memories.

Send flowers to the Poindexter family.