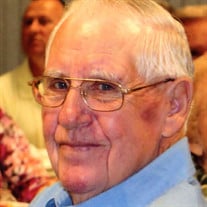 Bobby Wayne Reed was born on June 4, 1931, in Dent County, Missouri to Windfred and Maymie (Mauk) Reed. Wayne grew up and attended school at Hobson and New Hope in Dent County. He was drafted into the United States Army in 1954, serving eight years with two years being active duty. For his honorable service, Wayne earned many decorations, ribbons, and awards. On May 9, 1953, Wayne was united in marriage to his sweetheart, Ina Marie Mooney at the home of Rev. Johnny Blackwell. God blessed their home with a set of twins, Sherry and Terry, and sixty-seven wonderful years of memories. Wayne spent thirty years working for the Missouri Department of Conservation. He was an avid outdoorsman who worked hard to provide for his family. Wayne has been happily retired for twenty-eight years but continued to work on the farm. It was on the family farm, he raised his children and taught them the value of hard work. Wayne enjoyed working cattle and hauling hay. Wayne was a great example of God’s love and that was evident to everyone he met. He was a life-time member of Corinth Baptist Church where he served as a Deacon from 1956-until his passing. Wayne was one of a kind. He was truly a gentleman with a big heart, sweet soul, gentle spirit, and always had a smile. Wayne was a family man who treasured time spent with his family, especially his grandchildren and great-grandchildren. Some of their favorite memories include camping at Montauk, fishing on the Lake of the Ozarks, and canoeing on the Current River. Wayne went home to be with his Lord on September 18, 2020, in Columbia, Missouri at age of eighty-nine years. He leaves behind to cherish his memory his loving wife Marie (Mooney) Reed of Salem, MO; two children: Sherry Stallings and husband Rick of Salem, MO and Terry Reed and wife Jo Ann of Columbia, MO; three sisters: Jessie Schafer of Salem, MO, Carol Lewis of Salem, MO, and Beverly Canaday of Salem, MO; two brothers-in-law: James Mooney of Salem, MO and Earl Richardson of Springfield, MO; five sisters-in-law: Joann Enke and husband Don of Salem, MO, Blanche Sewell of St. Louis, MO, Shirley Jones of Arlington, TX, Meta Naramore and husband Oran of Salem, MO, and Barbara Hogan and husband Gary Paul of Salem, MO; six grandchildren: Andrea Long and husband Khiry, Jessica Christiano and husband Nick, Nathaniel “Nate” Stallings, and Michael, Megan, and Andrew Reed; six great-grandchildren: Ayden, Greyson, Michael, Niko, Harlee, and Jovanni; as well as many nieces, nephews, other relatives and friends. Preceding him in death his, parents: Windfred and Maymie (Mauk) Reed; brother: Vernon “Sonny” Reed and wife Joann; sister: Glenna Kay Reed; great-grandson: Cory Michael; parents-in-law: Clellar and Lillie May Mooney; brothers-in-law: Junior Schafer, Howard Canaday, Jack Jones, Floyd Lewis, Lloyd Mooney, Floyd Mooney, Clellar Mooney Jr. and LeRoy Sewell; sisters-in-law: Esther Schafer and husband Johnnie, Joyce Harrison and husband Bob, Jewell Abrams and husband Harry, and Mary Lou Richardson. Wayne will be remembered as a devoted husband, dedicated father, loving grandfather and great-grandfather. He was a caring brother and special friend to many. Wayne leaves behind a legacy that will carry on from generation to generation. Funeral Services for Bobby Wayne Reed were held Wednesday, September 18, 2020 in the Wilson Mortuary Salem Chapel with Pastor Carl Anderson and Bro. Scott Shults officiating. Memories were shared by grandchildren Andrea and Michael. Song selections played were “What A Friend We Have In Jesus”, “I Have A Home”, and “On The Far Side Banks of Jordan”. Serving as Pallbearers were Michael Reed, Andrew Reed, Nathaniel Stallings, Khirey Long, Nick Christiano, Rick Stallings, and Ayden Stallings. Honorary Pallbearers were the Missouri Department of Conservation Family. Military Honors was provided by the United States Army and American Legion Post 99. Burial was in the Green Forest Cemetery. Arrangements were under the direction of Wilson Mortuary Salem, Missouri. Memorial Contributions may be made in memory of Wayne Reed to Corinth Baptist Church or Green Forest Cemetery and left at Wilson Mortuary Online condolences maybe made at www.wilsonmortuary.com

Bobby Wayne Reed was born on June 4, 1931, in Dent County, Missouri to Windfred and Maymie (Mauk) Reed. Wayne grew up and attended school at Hobson and New Hope in Dent County. He was drafted into the United States Army in 1954, serving eight... View Obituary & Service Information

The family of Bobby Wayne Reed created this Life Tributes page to make it easy to share your memories.

Send flowers to the Reed family.