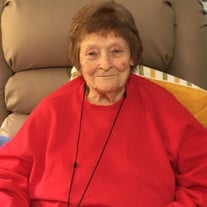 Bonnie Lou Williams was born on May 1, 1935, in Bunker, Missouri to William Harm and Rebecca Jane Williams and passed away on February 26, 2020, surrounded by her loving family at the Salem Care Center in Salem, Missouri at the age of eighty-four years. Bonnie grew up and attended school in Salem, Missouri. She was strong in her faith and a faithful member of Second Baptist Church of Salem. During her working years, Bonnie was employed with Barad's Lingerie. She also was a babysitter for many of her nieces and nephews along with several children from her many friends. She was a loving and caring woman who truly enjoyed spending time with children, and they became a huge part of her family and life. In her spare time, Bonnie enjoyed playing cards, watching the St. Louis Cardinals, and fishing when she was able. She loved finding yard sale bargains, collected many things, and never got rid of anything. Most important of all, Bonnie cherished the time spent with her family. Bonnie is survived by one sister-in-law: Marilyn Williams; six nieces: Ruth Adkins, Shirley Nash, Jeanette Russell, Carolyn Stauber, Florence Botkins, and Sonyia Harrison; one nephew: Mark Lewis; as well as many great-nieces, great-nephews, great-great-nieces, great-great nephews, extended family and friends. Preceding her in death were her parents and her siblings. Bonnie was a very strong, kind, loving and nurturing spirit that will be remembered by everyone that knew her, she will be deeply missed. Funeral Service for Bonnie Lou Williams was held Saturday, February 29, 2020 in the Wilson Mortuary Salem Chapel with Pastor Larry Nash officiating. Song selections played were “Old Rugged Cross”, “I Can Only Imagine”, and “I’ll Fly Away”. Serving as Pallbearers were Cory White, Charles King, Gary Nash, Zach Nash, Zeb Nash, and Josh Youst. Honorary Pallbearers were Dennis White, Keith Adkins, Brentlee Easter, and Aiden Catuett. Burial was in the Cedar Grove Cemetery. Arrangements were under the direction of Wilson Mortuary of Salem, Missouri. Memorial Contributions may be made in memory of Bonnie Lou Williams to St. Jude Children’s Hospital and left at Wilson Mortuary. Online condolences may be entered at www.wilsonmortuary.com

Bonnie Lou Williams was born on May 1, 1935, in Bunker, Missouri to William Harm and Rebecca Jane Williams and passed away on February 26, 2020, surrounded by her loving family at the Salem Care Center in Salem, Missouri at the age of eighty-four... View Obituary & Service Information

The family of Bonnie Lou Williams created this Life Tributes page to make it easy to share your memories.

Send flowers to the Williams family.