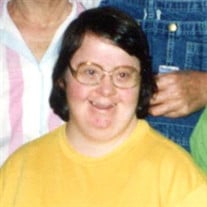 Brenda Mae Curley was born January 5, 1959 to Delbert and Lorene (Fox) Curley in Salem, Missouri and passed away July 10, 2019 at Hickory Manor in Licking, Missouri at the age of sixty years. Brenda grew up in Salem where as a young girl attended Ozark Hills State School. She also attended the Dent County Adult Activity Center for several years. She was raised in church and when given the opportunity attended Walking Faith Ministries with her sister Teresa. Brenda loved to go bowling as well as participate in the Special Olympics. She usually came home with several medals and a smile on her face. She enjoyed going out and getting ice-cream. She also loved her soda. She really looked forward to her sister Joyce's Pumpkin Pie and when mom was around she enjoyed her cooking. Brenda was strong and optimistic and an inspiration to everyone who had the opportunity to know her. She loved unconditionally, and only knew kindness, compassion and love. She had a love for babies and as well as animals. Brenda had a kind sweet spirit of innocence and with her smile, she made the world a better place. Brenda leaves behind to cherish her memory, her siblings: Wayne Curley and wife Gisela of Salem, MO, Allen Curley and wife Sandy of Salem, MO, Joyce Gray of Salem, MO, Janice Roper and husband Bob of Edgar Springs, MO, Michael Curley and wife Jequetta of Viburnum, MO and Teresa Decker and husband Lyndell of Salem, MO; sister-in-law: Mary Ann Curley of Salem, MO; special friends: Polly Mitchell and Sherry Brooks and many nieces, nephews, cousins, other relatives and friends. In addition to her parents, Brenda was preceded in death by her brothers: Leroy Curley, Larry Curley, Jack Curley; sister: Gail Curley; brother in law: David Gray Sr.; nephews: Nicholas Harbison and Daniel Decker and niece: Gabi Carpenter. Brenda lived a full and extraordinary life. She will be greatly missed by all those who knew and loved her. The family would like to thank Hickory Manor for accepting Brenda as part of their family. Funeral Service for Brenda Mae Curley was held Saturday, July 13, 2019 in the Wilson Mortuary Salem Chapel with Pastor Lyndell Decker officiating. Special music played was "Amazing Grace", "In the Garden" and "How Great Thou Art". Pallbearers were: Michael Curley, Chris Curley, David Gray Jr., Greg Sanders, Jimmy Decker, and Jacob Decker. Honorary Pallbearers were: Lynn Curley and Sean Curley. Burial was in the Mount Hermon Cemetery in Salem, Missouri. All arrangements were under the care and direction of Wilson Mortuary of Salem.

Brenda Mae Curley was born January 5, 1959 to Delbert and Lorene (Fox) Curley in Salem, Missouri and passed away July 10, 2019 at Hickory Manor in Licking, Missouri at the age of sixty years. Brenda grew up in Salem where as a young girl attended... View Obituary & Service Information

The family of Brenda Mae Curley created this Life Tributes page to make it easy to share your memories.

Brenda Mae Curley was born January 5, 1959 to Delbert and Lorene...

Send flowers to the Curley family.