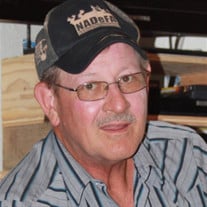 Calvin Eugene Kinley was born November 6, 1954 in Humnoke, Arkansas to Columbus Franklin and Addie Belle (Satterwhite) Kinley. He was raised in Stuttgart, Arkansas and graduated with the class of 1972 from Humnoke High School. Gene was united in marriage to the love of his life, Sally Lou Keating, on March 7, 1989 in Wynne, Arkansas. Gene and Sally shared together thirty-three years of laughter and memories and were blessed to share one daughter, Kerry. Gene was a hard worker, skilled auto mechanic and natural handyman. He took great pride in running the family farm until he retired in 1980. He could fix anything from farm equipment, to cars and diesels, and truly enjoyed tinkering around. Gene was an avid outdoorsman and when given the chance, he liked to hunt and fish. Gene was passionate about music and gifted with a talented voice. He enjoyed listening to bluegrass and country gospel music. Gene loved playing the guitar and in his younger years was a part of a group. He was a man of faith and member of New Home Baptist Church where he used his musical talent to bless others. Most important to Gene was his love for God and his family. He was a devoted husband to Sally and loving father. Gene treasured his grandchildren and adored his precious great-grandchildren. His greatest joy was making memories with them and creating a legacy for generations to come. Gene departed this life March 12, 2022 in Salem, Missouri surrounded by loved ones at the age of sixty-seven years. He leaves behind to cherish his memory, loving wife Sally Kinley of Salem, MO; daughter: Kerry Poindexter and husband Wilson of Salem, MO; grandchildren: Stefanie Kinsey and husband Nathan, Kate Majerus and husband Micah, Evan Poindexter, and Livvy Poindexter; great-grandchildren: Logan, Max, Ronen, and Oliver; brother: Billy Joe Kinley and wife Yvonne of Jacksonville, FL; lifelong friends: Terry and Beverly Swift; as well as a host of nieces, nephews, other relatives, and dear friends. Preceding him in death, parents: Columbus and Addie Kinley and siblings: Mary Ann, Doyle, Hester, William, and Robert. Gene will be remembered for his strength, positivity, and contagious smile. He will be forever missed by those who loved him most. The family is grateful for all those who were helpful during Gene’s illness. A special thank you to Kenny Glenn and Brian Towell for all that you have done. Memorial Services for Calvin “Gene” Eugene Kinley were held Sunday, March 20, 2022 in the Wilson Mortuary Salem Chapel with Pastor Charlie Younger officiating. Special Music was provided by Evan Poindexter and Micah Majerus. Arrangements were under the direction of Wilson Mortuary of Salem, Missouri. Online Condolences may be entered at www.wilsonmortuary.com

Calvin Eugene Kinley was born November 6, 1954 in Humnoke, Arkansas to Columbus Franklin and Addie Belle (Satterwhite) Kinley. He was raised in Stuttgart, Arkansas and graduated with the class of 1972 from Humnoke High School. Gene was united... View Obituary & Service Information

The family of Calvin "Gene" Eugene Kinley created this Life Tributes page to make it easy to share your memories.

Send flowers to the Kinley family.