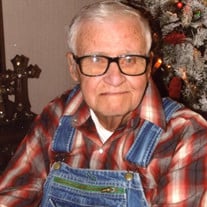 Calvin Vernell Watson was born on August 8, 1933, in Bunker, Missouri to George Washington and Flossie (Terrill) Watson and passed away on December 20, 2020 in Rolla, Missouri at the age of eighty-seven years. Calvin grew up in the Bunker/Gladden area and graduated from Bunker High School. He entered the United States Army on June 30, 1953 and served his country faithfully until his honorable discharge on May 14, 1955. Calvin served during the Korean War and earned several decorations, medals, badges, ribbons, and awards. Calvin was united in marriage to the love of his life, Dormilee Midyett, on October 15, 1955 in Gladden, Missouri. Together they shared nearly sixty years of memories before her passing on January 9, 2015. Calvin and Dormilee were blessed with four children: Randy, Brenda, Dannie, and David. Calvin was a hard worker in the Mines, and not only worked hard to provide for his family, but he taught them the value of hard work. Calvin also drove “Calvin’s Golden Rocket Shuttle Bus” for Akers Ferry Canoe Rental for many years. Calvin had such great love for his family and friends. He was a good man with kind disposition and was always willing to share his time and home with everyone. Calvin loved the outdoors and looked forward to fishing trips with his family on Lake Taneycomo. In his younger years, he enjoyed coon hunting. Making memories with his family was most important to him, especially those with his grandchildren, and great-grandchildren. Calvin is survived by, loving children: Randy Watson and wife Lisa of Salem, MO, Brenda Nivens and husband Tommy of Salem, MO, Dannie Watson and wife Linda of Salem, MO, and David Watson of Salem, MO; brothers: Buren Watson and wife Eileen of Illinois and Ronnie Watson and wife Sue of Williamsburg, MO; two sisters-in-law: Junya Mae Wofford of Salem, MO and Loma Jean Watson of Hermann, MO; grandchildren: Melanie Harrison and husband Jeremy, Brad Nivens and wife Courtney, Kristi Watson, Ryan Watson and wife Mandy, Michael Watson and wife Holly, and Alicia West and husband Tony; many great-grandchildren; one great-great-grandchild; as well as many nieces, nephews, extended family and friends. Preceding him in death, his loving wife: Dormilee Watson; parents: George and Flossie Watson; brothers: Ondo, Elvie, Jolly, and Lovell, infant brother: Thurman; and sisters: Imo and Iretta. Calvin will be remembered for his sweet and spunky personality, the love he had for his family and friends will be forever cherished. Funeral Services for Calvin Vernell Watson were held Wednesday, December 23, 2020 in the Wilson Mortuary Salem Chapel with Pastor Jim Privett officiating. Daylen and Alicia shared special poems. Song Selections played were “Go Rest High on that Mountain” and “Fishing in the Sky”. Serving as Pallbearers were Melanie Harrison, Brad Nivens, Kristi Watson, Ryan Watson, Michael Watson, and Alicia West. Honorary Pallbearers were his loving Great-Grandchildren. Burial with Full Military Honors was in the Miner Cemetery. Military Honors was provided by the United States Army and American Legion Post 99. Arrangements were under the direction of Wilson Mortuary of Salem, Missouri. Memorial Contributions may be made in memory of Calvin Vernell Watson and left at Wilson Mortuary. Online condolences may be entered at wilsonmortuary.com

Calvin Vernell Watson was born on August 8, 1933, in Bunker, Missouri to George Washington and Flossie (Terrill) Watson and passed away on December 20, 2020 in Rolla, Missouri at the age of eighty-seven years. Calvin grew up in the Bunker/Gladden... View Obituary & Service Information

The family of Calvin Vernell Watson created this Life Tributes page to make it easy to share your memories.

Send flowers to the Watson family.