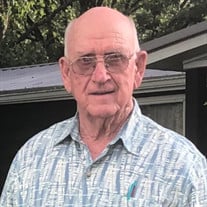 Carl Donald Marrill was born on April 20, 1940, in Doss, Missouri to Arthur and Rebal (Pidcock) Marrill and passed away on July 27, 2021, in Salem, Missouri at the age of eighty-one years. Carl was the third of five children born to Arthur and Rebal. Carl met the love of his life, Jan, on a blind date they went on with Harry and Leda Jackson. They fell in love and were united in marriage on April 24, 1965 in Salem, Missouri and together shared fifty-six wonderful years of marriage. They were blessed with four children: Timothy, Terry, Don, and Julie. Carl worked hard to provide for his family, he spent many years working in the transportation business. He was a truck driver, operated a dump truck, and worked for Rightway Homes for several years moving homes. Carl was a caring man who would do anything for anyone. He was always ready to lend a helping hand, whether it was installing a tile floor or a plumbing issue, Carl was an all around handyman who could fix anything. He was a man of great faith and was Pastor at Fisher's of Men Church of God in Salem. Carl let the light of the Lord shine through him. Carl enjoyed spending time outdoors. He loved to feed and watch the birds, especially the hummingbirds. Carl had a natural talent for music and could play most any stringed instrument including guitar, mandolin, fiddle, and banjo. He liked to garden and would generously share his bounty with others. Carl kept up with current affairs and was an avid Fox News watcher. Family was of highest importance to Carl: he was devoted husband to Jan, dedicated father to his children, and a proud grandfather of his grandchildren. Carl loved his grandkids deeply and cherished every moment spent with the family he adored. Carl is survived by his loving wife Jan of the home; children: Timothy Marrill and Carlene Stringer of Salem, MO, Don Marrill of Salem, MO, Julie Hatridge and husband Dan of Salem, MO; grandchildren: Terry Marrill, Mikayla Shook, Kassi Marrill, Kari Hatridge, and Tatum Hatridge; great-grandchildren: Ayden Marrill, Jacob Shook, Eli Shook, Brooklynn Bowen, and Addison Bowen; as well as a host of nieces, nephews, other relatives and friends. Preceding him in death, parents: Arthur and Rebal Marrill; son: Terry Marrill; brothers: Billy, Bobby, and Melvin Marrill; and sister: Jessie Keitzer. Carl will be remembered for his love of family and strong faith in God. He leaves behind a legacy of a life well lived in love and service. Carl will be deeply missed by all who knew him. Funeral Services for Carl Donald Marrill were held Saturday, July 31, 2021 in the Wilson Mortuary Salem Chapel with Bro. Calvin Foster officiating. Song selections played were “I Want To Stroll Over Heaven With You”, “The Holy Hills of Heaven Call Me”, “Well Done”, and “Go Rest High On That Mountain”. Serving as Pallbearers were Terry Marrill, Steve Jackson, Steve Burnham, Mike Strauser, Dwayne Miller, Bud Strauser. Honorary Pallbearers were David Hunter and Doyle Murr. Burial was in the New Hope Cemetery. Arrangements were under the direction of Wilson Mortuary of Salem, Missouri. Online condolences may be entered at wilsonmortuary.com

Carl Donald Marrill was born on April 20, 1940, in Doss, Missouri to Arthur and Rebal (Pidcock) Marrill and passed away on July 27, 2021, in Salem, Missouri at the age of eighty-one years. Carl was the third of five children born to Arthur... View Obituary & Service Information

The family of Carl Donald Marrill created this Life Tributes page to make it easy to share your memories.

Send flowers to the Marrill family.