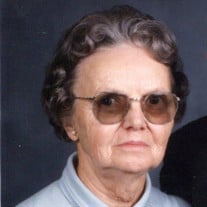 Carol Sue (Shelton) Bell was born June 7, 1922 in rural Salem, Missouri to James and Emma (McCole) Shelton and passed away January 12, 2022 in Salem, Missouri at the age of ninety-nine years. Carol grew up in Rhyse, Missouri and graduated with the class of 1940 from Salem High School. She was united in marriage to the love of her life, Paul Lavern Bell, on May 14, 1940 in Steelville, Missouri. Shortly after marriage, Paul enlisted into the military and while stationed in California, Carol furthered her education obtaining her bachelor’s degree at University of Southern California. Carol started her long and successful career as an engineer with McDonnel Douglas and in 1958, she was recruited to work for NASA with the first seven astronauts in Project Mercury. Carol and Paul loved the water, after retiring, they moved to North Fork Lake in Arkansas. Carol loved to swim and even in her later years enjoyed water skiing. She liked spending time outdoors and camping. Carol was gifted talented hands and knitted, crocheted, and did needle point. Carol was a loving and caring aunt to her nieces, nephews and their families. She truly treasured making memories with them. She was a lady of great faith and member of New Hope Cumberland Presbyterian Church. Carol leaves behind to cherish her memory, nieces: Sandie Hogan and husband Kirk of Salem, MO and Carol Streeter and husband Carson of La Junta, CO; nephew: Bill Shelton and wife Sherry of Salem, MO; as well as a host of great-nieces and nephews and their family, extended family, and friends. Preceding her in death, beloved husband of sixty-nine years: Paul Bell; three brothers: Jim, Clarence, and Bill Shelton; and three sisters: Wilma Shelton, Hazel Verdi, and Waunie Shelton. Carol will be remembered for the love she had for her family and friends. She will be forever missed but never forgotten. Funeral Services for Carol Sue (Shelton) Bell were held Monday, January 17, 2022 in the Wilson Mortuary Salem Chapel with Pastor Terry Davis officiating. Song selections played were “Amazing Grace” and “Beulah Land”. Serving as Pallbearers were Austin Shelton, Jesse Shelton, John Hagler, and Brady Hagler. Burial was in the Dry Fork Cemetery. Arrangements were under the direction of Wilson Mortuary of Salem, Missouri. Online condolences may be entered at wilsonmortuary.com

Carol Sue (Shelton) Bell was born June 7, 1922 in rural Salem, Missouri to James and Emma (McCole) Shelton and passed away January 12, 2022 in Salem, Missouri at the age of ninety-nine years. Carol grew up in Rhyse, Missouri and graduated with... View Obituary & Service Information

The family of Carol Sue (Shelton) Bell created this Life Tributes page to make it easy to share your memories.

Send flowers to the Bell family.