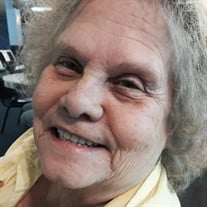 Carol Ann (Iverson) Shipley was born on December 19, 1943 in Kansas City, Missouri to Maurice Alvin and Yvonne Adele (Logston) Iverson. Carol lived most of her life in Kansas City, graduating high school and furthering her education at a local college. Carol was united in marriage to the love of her life, Don Ray Shipley on October 18, 1961 in Kansas City. Carol and Don grew up together and at a young age watched their first movie together, “House of Wax”. Carol and Don shared nearly sixty years of marriage together and were blessed with eight children: Jon, Penny, Charles, Micheal, Shawn, Dawn, Tammy, and Teresa. They moved to Salem, Missouri in 1972 after deciding it would be a good place to raise a family. Carol was a homemaker and took great pride in raising her family and tending to her home. She truly enjoyed spending time in the kitchen cooking for her family. Carol went to work outside the home after her kids were grown. She was a teacher’s aide at Head Start and later the manager of Pizza Hut. Carol had talented hands and enjoyed crafting. In her spare time, she liked attending area craft shows and selling her crafts. Carol spent time outdoors camping at Montauk and loved to travel. She was a member of Salem Lutheran Church. Her family was most important to her was her family and she treasured the memories made with them, especially with her grandchildren, great-grandchildren, and great-great-grandchildren. Carol departed this life on June 6, 2021, in the Missouri Baptist Medical Center of St. Louis, Missouri at the age of seventy-seven years. She leaves behind to cherish her memories, her loving husband Don Shipley of Salem, MO; children: Jon Shipley and wife Sherilyn of Van Buren, AR, Penny Lanham and husband Tom of Union, MO, Charles Shipley of Indianapolis, IN, Micheal Shipley and wife Jennifer of Whitestown, IN, Shawn Shipley and wife Jennifer of Waynesville, MO, Dawn Vice and husband Timothy of Carbondale, KS, Tammy Jaramillo and husband Robert of Olathe, KS, Teresa Scott and husband Joseph of Topeka, KS; thirty-nine grandchildren; seventeen great-grandchildren; two great-great-grandchildren; extended family and friends. Carol is preceded in death by her parents: Maurice and Yvonne Iverson and sister: Patty. Carol was a devoted wife, caring mother, and loving grandmother, great-grandmother, and great-great-grandmother. The memories they shared together will be cherished forever. Celebration of Life for Carol Ann (Iverson) Shipley was held Wednesday, June 9, 2021 in the Wilson Mortuary Salem Chapel. Arrangements were under the direction of Wilson Mortuary of Salem, Missouri. Memorial Contributions may be made in memory of Carol Ann Shipley to a Charity of your choice. Online condolences may be entered at wilsonmortuary.com

Carol Ann (Iverson) Shipley was born on December 19, 1943 in Kansas City, Missouri to Maurice Alvin and Yvonne Adele (Logston) Iverson. Carol lived most of her life in Kansas City, graduating high school and furthering her education at a local... View Obituary & Service Information

The family of Carol Ann (Iverson) Shipley created this Life Tributes page to make it easy to share your memories.

Send flowers to the Shipley family.