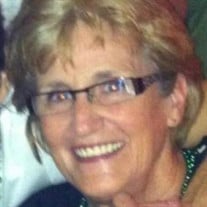 Carol (Hayes) Webster was born June 26, 1952 in Salem, Missouri to Charles and Martha (Vandivort) Hayes and departed this life March 24, 2022 surrounded by her loving family at her home in Salem, Missouri at the age of sixty-nine years. Carol grew up in Salem and graduated from Salem High School. She was a hard worker and worked as a Kindergarten Aide with William Lynch Elementary School before starting her secretary career at First National Bank. Carol retired from South Central Correctional Center after many dedicated years. Carol was a strong, loving mother who devoted her life to her two daughters, Lynette and Leah. She loved her family and valued spending time with them. Carol was a doting grandmother and proud great-grandmother of her grandchildren. She cherished the time spent with them and treasured the memories they made together. Carol enjoyed online shopping and side by side rides. She loved taking girls trips with the “JUGS”, they frequently visited Table Rock Lake and attended several concerts. Carol was a lady of faith and member of the American Legion Post 99 Ladies Auxiliary. Carol leaves behind to cherish her memory, loving daughters: Lynette Happel of Salem, MO and Leah Happel of Salem, MO; grandchildren: Brittany Perkins and Andy Stallcop of Salem, MO, Brady Strader and Allie Fleener of Salem, MO, Jakob Happel of Salem, MO, and Kara Happel of Salem, MO; great-grandchildren: Jayce, Brooklyn, Preston, Madyson, Kadyn, Zoey, and Jaxxon; as well as a host of nieces, nephews, cousins, other relatives and dear friends. Preceding her in death, parents: Charles and Martha (Vandivort) Hayes and sister: Kay Welchhans. Carol was full of life with a fun, sweet, kind, and caring personality. She will be remembered for her beautiful smile and great legacy. Private Graveside Service for Carol (Hayes) Webster was held Tuesday, March 29, 2022 in the Cedar Grove Cemetery with Mike Wofford officiating. Arrangements were under the direction of Wilson Mortuary of Salem, Missouri. Memorial Contributions may be made in memory of Carol Webster to the American Legion Post 99 Ladies Auxiliary and left at Wilson Mortuary. Online Condolences may be entered at www.wilsonmortuary.com

Carol (Hayes) Webster was born June 26, 1952 in Salem, Missouri to Charles and Martha (Vandivort) Hayes and departed this life March 24, 2022 surrounded by her loving family at her home in Salem, Missouri at the age of sixty-nine years. Carol... View Obituary & Service Information

The family of Carol (Hayes) Webster created this Life Tributes page to make it easy to share your memories.

Send flowers to the Webster family.