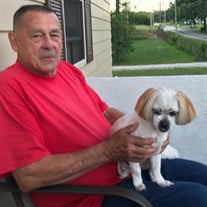 Charles "Dave" David Chrisco was born on July 30, 1940 in Eminence, Missouri and passed away on October 27, 2020 at Seville Care Center in Salem, Missouri at the age of eighty years. Dave entered the United States Army on January 29, 1958 and honorably served his country. Upon his discharge, Dave worked in the Timber Industry. He worked hard as a logger for many years to provide for his family. Dave was the proud father of two children, Davie and Ginger. He spent several years with the love of his life, Arlene. They treasured each other's company and went through life by the others side. Dave was an avid outdoorsman who enjoyed fishing and hunting. Building old cars was another passion of Dave's and he was a member of a local car club. Dave was a man of faith who took great pride in his family and cherished the memories made together. Dave is survived by Arlene Martin; son: Davie and wife Mendy; daughter: Ginger Salmons; step-children: John Harrison and wife Angie, Amanda Blaylock and husband Jerry, Jeremy Harrison and wife Melanie; as well as a host of grandchildren, great-grandchildren, nieces, nephews, cousins, other relatives and friends. Preceding him in death, his parents and two brothers. Dave leaves behind a legacy of love and friendship. He will be deeply missed, but his memory will be treasured forever by all who knew and loved him. Memorial Services for Charles David “Dave” Chrisco were held Saturday, November 7, 2020 in the Wilson Mortuary Salem Chapel with Pastor Charlie Younger officiating. Opening Prayer was given by Daylen Harrison and Closing Prayer by Cody Harrison. Special Music was provided by Amanda Blaylock singing “Amazing Grace, My Chains are Gone” with additional song selections “While He Still Knows Who I Am” and “I Want To Stroll Over Heaven With You”. Military Honors was provided by American Legion Post 99 and the United States Army. Current River Cruisers Car Club honored Dave with a Cruise-In and Cruise around town. Arrangements were under the direction of Wilson Mortuary of Salem, Missouri. In lieu of flowers, Memorial Contributions may be made in memory of Charles “Dave” David Chrisco and left at Wilson Mortuary. Online condolences may be entered at wilsonmortuary.com

Charles "Dave" David Chrisco was born on July 30, 1940 in Eminence, Missouri and passed away on October 27, 2020 at Seville Care Center in Salem, Missouri at the age of eighty years. Dave entered the United States Army on January 29, 1958 and... View Obituary & Service Information

The family of Charles "Dave" David Chrisco created this Life Tributes page to make it easy to share your memories.

Send flowers to the Chrisco family.