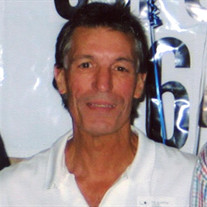 Charles "Pat" Patrick Dalton was born on July 11, 1948 in Columbia, Missouri to William Lee and Mildred Nadine (Cobb) Dalton and passed away on October 10, 2019 in Salem, Missouri at the age of seventy-one years. Pat grew up in Salem, Missouri and graduated from Salem High School with the Class of 1966. He entered the United States Army on May 24, 1968 and faithfully served his country until his honorable discharge. Pat married the love of his life, Robin Yeomans on November 19, 1988 in Salem, Missouri and together they shared thirty-one years of marriage. Pat was the owner of Roc's Sporting Goods in Salem and enjoyed serving his community for several years. He loved spending time getting to know many families and being able to support local organizations and groups. Pat also enjoyed hanging out with friends as they came into the store. In his spare time, Pat enjoyed the outdoors. He liked hunting quail and pheasant. Pat also enjoyed fishing at his lake and float trips on the river. He embraced life and the many adventures he had with his family and friends. Pat treasured his family and cherished the time spent with them. Preceding him in death were his parents: William and Mildred Dalton Pat is survived by his loving wife: Robin (Yeomans) Dalton of Salem, MO; step-son: Justin Frankenreiter and Chrissie Maples of Springfield, MO; siblings: Davis Dalton and wife Patricia of Alto, NM, John Dalton and wife Billie of Scottsdale, AZ and Kay Whitaker and husband Rick of Salem, MO; nephews: Jim Dalton and wife Stephanie of Conifer, CO, John Whitaker and wife Rachel of St. Louis, MO, Matt Whitaker of Lincoln, NE and Kevin Bellamy and wife Shannon of North Carolina; extended family and friends. Pat was a loving husband and good friend. He will be deeply missed by all who knew and loved him. Funeral Service with Military Honors for Charles "Pat" Patrick Dalton was held Saturday, October 19, 2019 in the Wilson Mortuary Salem Chapel. Friends and Family shared memories of Pat. Song Selections played were "Time Of Your Life" and "When I Get Where I'm Going". Military Honors was provided by the American Legion Post 99. All arrangements were under the direction of Wilson Mortuary of Salem, Missouri.

Charles "Pat" Patrick Dalton was born on July 11, 1948 in Columbia, Missouri to William Lee and Mildred Nadine (Cobb) Dalton and passed away on October 10, 2019 in Salem, Missouri at the age of seventy-one years. Pat grew up in Salem,... View Obituary & Service Information

The family of Charles "Pat" Patrick Dalton created this Life Tributes page to make it easy to share your memories.

Send flowers to the Dalton family.