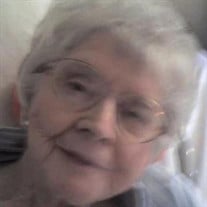 Claricelee (Rudd) Lewis was born on October 23, 1925, in Salem, Missouri to Edward and Elsie (Foster) Rudd and passed away on January 3, 2021 at Salem Memorial District Hospital in Salem, Missouri at the age of ninety-five years. Claricelee was raised in Salem and graduated from Salem High School. She was united in marriage to the love of her life, Wilber "Pete" Lewis, on May 12, 1949 and together shared forty-six years of memories before his passing on September 11, 1995. Claricelee and Pete were blessed with three daughters: Deborah, Carol, and Kimberly. Claricelee worked in several local factories to include, International Shoe Factory, Barad's, and Ely Walker Factory in the 1950's. She took great pride in caring for her family and tending to her home. Pete and Claricelee moved their little family to Mountain Grove in 1960 and spent the next seven years there due to Pete's work as manager of the Coke Plant. Those were some of the happiest years for their family and they treasured that season in their lives. Work brought the Lewis family back to Salem and Claricelee spent some time working for the Postal Service in later years. Claricelee would read any book she could get her hands on, and writing was a true passion of hers. Genealogy was another interest of Claricelee's and she loved researching and documenting Rudd and Foster family history. She was quite an artist and was very talented with her hands which was evident in her sketches and quilt making. She was a woman of faith and attended Gladden Baptist Church in her younger years. Claricelee was family-oriented and cherished time spent with her family. She dearly loved babysitting her grandchildren and making memories with them. She had an especially close relationship with her brother, Lloyd; never having an argument between them. Claricelee leaves behind to cherish her memories, three daughters: Deborah Lee Baker of Salem, MO, Marsha Carol Smith of Rolla, MO, and Kimberly Medley and husband Bryon of Salem, MO; grandchildren: Scott Smith of Ozark, MO, Alicia Medley-Hampton and husband Kyle of Springfield, MO, Emily Smith-McGuirt of Mississippi, Sarah Medley of Lees Summit, MO, and Jessica Lee Medley of Salem, MO; great-grandchildren: Peyton McGuirt, Chloe Russell, and Karson Hampton; sisters-in-law: Mary Rudd, Norma Jean Hampton, Ileen Steelman, and Cathleen Lewis; as well as a host of nieces, nephews, other relatives, and friends. Preceding her in death, husband: Wilber “Pete” Lewis; parents: Edward and Elsie Rudd; brother: Edward Lloyd Rudd; infant sister; grandchildren: Christopher Smith and Stephen Baker. Claricelee will be remembered for her kind and gentle spirit. She leaves behind everlasting memories that will be cherished by all who knew and loved her. Funeral Services for Claricelee (Rudd) Lewis were held Thursday, January 21, 2021 in the Wilson Mortuary Salem Chapel with Scott Jadwin and Scott Smith officiating. Special music was provided by Carol Smith singing “Amazing Grace” additional song selection played was “You Raise Me Up”. Serving as Pallbearers were Ronnie Lewis, Peyton McGuirt, Scott Smith, Bryon Medley, Kyle Hampton, and Larry Douglas. Honorary Pallbearer was Karson Hampton. Burial was in the Cedar Grove Cemetery. Arrangements were under the direction of Wilson Mortuary of Salem, Missouri. Memorial Contributions may be made in memory Claricelee Lewis to the Dementia Society of America or Alzheimer's Association and left at Wilson Mortuary. Online condolences may be entered at wilsonmortuary.com

Claricelee (Rudd) Lewis was born on October 23, 1925, in Salem, Missouri to Edward and Elsie (Foster) Rudd and passed away on January 3, 2021 at Salem Memorial District Hospital in Salem, Missouri at the age of ninety-five years. Claricelee... View Obituary & Service Information

The family of Claricelee (Rudd) Lewis created this Life Tributes page to make it easy to share your memories.