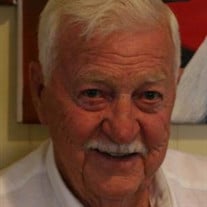 Claude Allen Lunn was born March 3, 1934 in Rhyse, Missouri to Phillip and May (Agee) Lunn and passed away September 8, 2018 in Edwardsville, Illinois at the age of 84 years. Preceding him in death were his beloved first wife, Kathleen Rhoades... View Obituary & Service Information

The family of Claude Allen Lunn created this Life Tributes page to make it easy to share your memories.

Send flowers to the Lunn family.