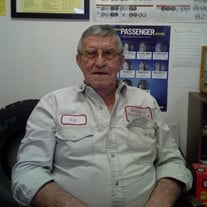 Cleo James Shaw was born March 10, 1940 in Eminence, Missouri to Howard Oakley and Floy Ann (Hiney) Shaw. He grew up and attended school in Salem, Missouri. At a young age, Cleo enlisted into the United States Army National Guard and served his country faithfully until his honorable discharge. Cleo married the love of his life, Janice Ann Jordan, June 12, 1964 at Oak Grove Baptist Church in Salem and shared together fifty-seven years of laughter and memories. Cleo and Jan were blessed with two wonderful daughters, Sarah Elizabeth and Julie Ann. As a young man, Cleo started his working career in the cord woods. Soon after he opened Shaw’s Truck Sales, where he took great pride owning and operating his own business. Cleo never met a stranger and had a heart of gold. Throughout his career, he was able to gain many wonderful colleagues and friends. Cleo enjoyed playing golf and watching NASCAR. He liked going on vacations with his friends. Cleo loved his family, his grandchildren and great-grandchildren were his pride and joy, and he cherished every moment he spent with them. Cleo departed this life January 11, 2022 in Joplin, Missouri surrounded by loved ones at the age of eighty-one years. He leaves behind to cherish his memory, loving wife Jan Shaw of Salem, MO; two daughters: Sarah Parker and husband Monte of Joplin, MO and Julie Baron and husband Jeffrey of Tucson, AZ; five grandchildren: Paige Ebbs and husband Aaron of Joplin, MO, Brooke Parker of Joplin, MO, Preston Parker of Joplin, MO, Jake Baron of Tucson, AZ, and Mia Baron of Tucson, AZ; two great-grandchildren: Addison and Avery Ebbs; as well as a host of nieces, nephews, other relatives, and dear friends. Preceding him in death, parents: Howard and Floy Shaw; brothers: Gary and Erman Shaw; nephew: Coy Shaw; and father-in-law and mother-in-law: Bud and June Jordan. Cleo was one of a kind and leaves behind a legacy of love and devotion. He will be forever missed but never forgotten. Funeral Services Cleo James Shaw were held Saturday, January 15, 2022 in the Wilson Mortuary Salem Chapel with Elder Dannie Patterson officiating. Loving Memories were shared by Jeffrey Baron. Song selections played were “I’ll Fly Away”, “Amazing Grace”, and “He Stopped Loving Her Today”. Serving as Pallbearers were Monte Parker, Jeffery Baron, Preston Parker, Brooke Parker, Paige Ebbs, Aaron Ebbs, Tommy Shaw, and Chris Passsalacqua. Honorary Pallbearers were Mia Baron, Lonnie Southards, and Jake Baron. Burial was in the Cedar Grove Cemetery. Arrangements were under the direction of Wilson Mortuary of Salem, Missouri. Memorial Contributions may be in memory of Cleo Shaw to Project Win Cancer Support of Salem and mailed to PO Box 901 Salem, MO 65560 or left at Wilson Mortuary. Online condolences may be entered at wilsonmortuary.com

The family of Cleo James Shaw created this Life Tributes page to make it easy to share your memories.

Send flowers to the Shaw family.