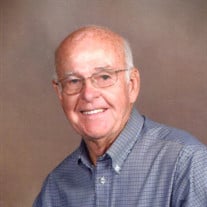 Clifford "Junior" Marion Adams, Jr. was born in Dillard, MO on March 11, 1933 to Clifford and Gertrude Adams. He spent his childhood in the hills of Boss, Missouri fishing in the creeks with his boyhood friends and cousins. As an older teenager, he enlisted in the Army and proudly served his country before moving back home to help his parents with the farm and family business. It was at the Adams market that he met Betty Mae Akers, a city girl visiting family. The two of them courted for four years and eloped after a long day's work on March 29, 1958. For fifty six years they built a beautiful life together and kept their doors open for anyone at their home known as the farmhouse. They had three children; Tammy, Chip and Sally. After nearly two decades in the grocery business, Junior decided to change careers completely and started Adams Construction. He built many homes, businesses and developed multiple subdivisions in the area. His passion was building churches and he was honored to build his home church, Grace Community Church where he served in various areas of ministry. He led Royal Rangers, taught Sunday School for many years and served for over 25 years as church treasurer and deacon. Building was not just his craft, but the way he approached everything in life. He carefully and intentionally built a family, a legacy and memories that his kids and grandkids would hold tightly for years. He loved fishing, hunting, gardening and any kind of outside work. Junior is survived by his son Chip Adams and wife Missi; daughter Sally Wood and husband Shea; other son Mickey Davis, who married his first-born daughter, Tammy; Eleven Grandchildren: Jody McQueary and husband Caleb, Jordan Davis and wife Sabrina, Adam Wood and wife Ashlee, Cassidy Poe and husband Gavin, Sydney Wood and fiancé Nate Lambert, Brady Adams and wife Micah, Ben Adams and wife Mikaela, Brooke Adams, Derric Lough and wife Jess, Kirsten McClintock and husband Phil and Bailey Hall and husband Justin; and ten great grandchildren. He was preceded in death by his wife Betty Adams, daughter Tammy Davis, sister Dot Wisdom and parents Cliff and Gertie Adams. Junior was a kind, generous man who never met a stranger and will be greatly missed by his family and a multitude of friends. Funeral Service for Clifford "Junior" Adams, Jr. was held at Grace Community Church with Rev. Mickey Davis officiating. Music was led by Pastor Shannon and Tira Lambert and pianist Christy Leathers. Song were "He Keeps Me Singing", "Everybody Will Be Happy Over There", "When We All Get To Heaven" and "Leaning On The Everlasting Arms". Pallbearers were Jordan Davis, Brady Adams, Ben Adams, Adam Wood, Caleb McQuaeary and Gavin Poe. Honorary Pallbearers were Al Gowen and Jack Stallings. Interment was in the Cedar Grove Cemetery in Salem, Missouri. All arrangement under the care and direction of Wilson Mortuary of Salem.

Clifford "Junior" Marion Adams, Jr. was born in Dillard, MO on March 11, 1933 to Clifford and Gertrude Adams. He spent his childhood in the hills of Boss, Missouri fishing in the creeks with his boyhood friends and cousins. As an older teenager,... View Obituary & Service Information

The family of Clifford Marion Adams Jr. created this Life Tributes page to make it easy to share your memories.

Send flowers to the Adams family.