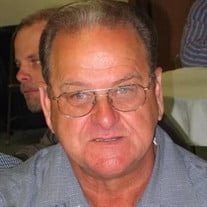 Clifford Arnold Jadwin was born on June 23, 1947, in Salem, Missouri to Cleo Leland and Hattie Elizabeth (Drewell) Jadwin. He was raised in the Salem/Jadwin area and graduated with the Class of 1965 from Salem High School. Clifford joined the Army National Guard and served his country faithfully and honorably for fourteen years. Clifford met the love of his life, Susan Margaret Myers, through a mutual friend Gary Strader and on December 9, 1967 at the Jadwin Church of Christ they were united in marriage. Clifford and Sue shared fifty-three years of memories together and were blessed to share four children: Sherri, Sean, Casey, and Jeremy. Clifford was nothing more than a good, honest hard-working man. Before his law enforcement career began, he was a logger cutting cord wood. In the early 1970s, Clifford started as a Deputy Sheriff with the Dent County Sheriff’s Department, also serving as a Park Ranger with the Missouri Department of Conservation. Clifford was honored to be Dent County Sheriff from 1976 to 1992. He served as an auxiliary police officer with the Salem Police Department starting in 1993, and from 1996 to 2001 Clifford served as Police Chief. During his time as Chief, Clifford had started the “cussing can” and to this day stories are told. Clifford was a top-notch law enforcement officer with a servant’s heart, and well liked in the community, he truly enjoyed serving Dent County. No matter how hard Clifford worked, he still found time to be with his family. Clifford was one of a kind and lived life to the fullest. He was a dedicated and devoted husband, loving father, and caring grandfather and great-grandfather. Clifford loved his family and treasured making memories with them; especially with his grandchildren, great-grandchildren, nieces, and nephews. Clifford was an avid outdoorsman and loved hunting, fishing, gigging, and camping at Montauk and Clearwater. Clifford was quite a character; he always had a smile on his face and a story to tell. He was well known for his deer hunting and campfire stories. Clifford always looked forward to a good fish fry. He liked playing softball and enjoyed a good game of cards, especially Canasta on Friday nights with friends. Clifford was a great role model and true man of God; he was a lifelong Church of Christ member. Clifford was a member of the Missouri Sheriffs Association, National Rifle Association, and Rocky Mountain Elk Foundation. Clifford departed this life on April 11, 2021 surrounded by his loving family at his home in Salem, Missouri at the age of seventy-three years. Clifford leaves behind to cherish his memory, his loving wife Sue Jadwin of the home; children: Sherri Roe and husband Craig of Kimberling City, MO, Sean Ralston of New Boston, TX, Casey Jadwin of Houston, MO, and Jeremy Jadwin and wife Jamie of Carthage, MO; siblings: Dennis Lee and wife June of Jadwin, MO, Wayne Jadwin and wife Linda of Ongo, MO, Janet Vasel and husband Gary of Fenton, MO, Roger Jadwin and wife Jane of Salem, MO; sister-in-law: Sue Jadwin of Jadwin, MO; grandchildren: Amanda, Aaron, Tim and wife Angel, Charlee Sue, Cooper, Briley, and Nate; great-grandchildren: Aubrey, Trinity, and Paisley; as well as many nieces, nephews, cousins, other relatives and friends. Preceding him in death, his parents: Cleo and Hattie Jadwin; brother: Clinton Jadwin; infant sister: Donna Jadwin; and grandson: Bryan Ralston. Clifford was a legend in the Dent County Community. His legacy of strength and love of family leaves a lasting impression on those whose lives he touched. His smile and joking nature will never be forgotten. Clifford will be forever missed. Memorial Contributions may be made in memory of Clifford Jadwin to St. Jude Children’s Hospital and left at Wilson Mortuary. Online condolences may be entered at wilsonmortuary.com

Clifford Arnold Jadwin was born on June 23, 1947, in Salem, Missouri to Cleo Leland and Hattie Elizabeth (Drewell) Jadwin. He was raised in the Salem/Jadwin area and graduated with the Class of 1965 from Salem High School. Clifford joined the... View Obituary & Service Information

The family of Clifford Arnold Jadwin created this Life Tributes page to make it easy to share your memories.

Send flowers to the Jadwin family.