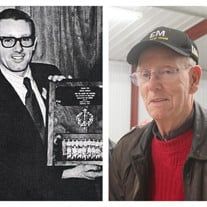 Coach Carol L. Jordan was born January 10, 1938 in St. Louis, Missouri to Elzie and Eudora (Hill) Jordan and passed away July 20, 2019 surrounded by his loving family at his home in Salem, Missouri at the age of eighty-one years. As a young boy, Coach grew up in Bunker, Missouri and graduated from Bunker High School. He obtained his teaching degree at Arkansas State University. Coach was saved and baptized at an early age and was currently serving as a member of New Harmony Church. He was a proud supporter of the Fellowship of Christian Athletes and a member of the Missouri Retired Teachers Association. Coach married, his late wife, Melba Fay Jackson August 18, 1956 and shared together forty-five wonderful years of marriage until her passing in September 2001. Coach and Melba were blessed with two children: Darin and Heather. On March 28, 2009 Coach married Susan Stewart and added to his family two additional children: Sarrah Pickering and Nick Harris. Coach was a dedicated educator who worked tirelessly throughout his thirty-three year career to inspire his students. His teaching career was mostly health and physical education at Rector, Bunker, Oak Hill R-1, Northwood R-4 and Salem R-80. He coached basketball, football and track. His players learned not only the skills of the game, but valuable life skills that would benefit them immeasurably in their adulthood. The admiration and respect he earned from his players continued to grow long after their playing days, and his relationships with his former players were cherished by him his entire life. When he wasn't on the field, Coach loved to travel and enjoyed spending time with his family. He loved to spoil his grandchildren and cherished time spent with those he loved most. He had a passion for taking videos and pictures of the scenery out west. He would "road hunt" to take pictures and videos of deer, turkey and any other wild animal he would come across. Preceding him in death were his parents, Elzie & Eudora Jordan, his first wife Melba (Jackson) Jordan and sisters, Melissa Barton and Pat Botkin. Coach is survived by his loving wife: Susan Jordan of Salem, MO; children: Darin Jordan of Salem, MO and Heather Jordan of Salem, MO; stepchildren: Sarrah Pickering of Salem, MO and Nick Harris of Salem, MO; four grandchildren: Stephanie Dunn and husband Richie of Lesterville, MO, Katie Revelle of Davisville, MO, Christian Jordan and wife Samantha of Salem, MO and Emalee Brickey of Greensburg, IN; three great grandchildren: Cadence Dunn, Mason Dunn and Jaxon Revelle; sister: Lavetta Leonard of Chesterfield, MO; many other nieces, nephews, family and friends. Coach loved all of the young people he taught and coached, as well as, his coworkers. He was a loving husband, proud father and caring grandfather. He lived a full and prosperous life, that created so many wonderful memories for him and others. Funeral Service for Coach Carol L. Jordan was held Tuesday, July 23, 2019 with Pastor David Gidcumb officiating. Song selections played were "One True Love", "The Prayer" and "I Can Only Imagine". Serving as Pallbearers were Christian Jordan, Richie Dunn, Nick Harris, Tim Sanders, John Halbert and Brett Goforth. Burial was in the Cedar Grove Cemetery. All arrangements were under the direction of Wilson Mortuary of Salem, Missouri.

Coach Carol L. Jordan was born January 10, 1938 in St. Louis, Missouri to Elzie and Eudora (Hill) Jordan and passed away July 20, 2019 surrounded by his loving family at his home in Salem, Missouri at the age of eighty-one years. As a young... View Obituary & Service Information

The family of Coach Carol L. Jordan created this Life Tributes page to make it easy to share your memories.

Send flowers to the Jordan family.