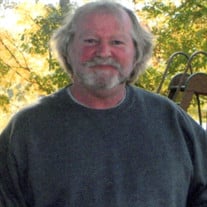 Coy Erman Shaw was born on December 18, 1959, in Salem, Missouri to Erman Lavern and Norma (Prater) Shaw and passed away on May 1, 2020, in Fenton, Missouri at the age of sixty years. Coy grew up and attended school in Salem, Missouri. He married the love of his life, Velma Jo (Adams) Atchison on October 18, 1980 and together they shared thirty-nine years of marriage and were blessed with two children: Denise and Brian. Coy was a hard worker and worked hard to provide for his family. He was a cable man for nine years, but his passion was working in the woods. Coy was an avid woodsman and a nature enthusiast. He worked in the woods as a cordwood cutter and logger for nearly thirty-years and truly enjoyed the time spent outdoors. Coy was a one of a kind, fun-loving and sincere man. His hobbies include street racing, mud runs with his best friend Jerry, attending car and monster truck shows, going to the track, tinkering on hot rods, and playing with his mud truck. Coy’s passion was to travel, he spent many years just looking for the next adventure. Coy truly loved his family and cherished the time spent with them, especially with his grandchildren. He enjoyed watching them ride go-carts and taking them on ATV rides. Coy is survived by his loving wife: Velma (Atchison) Shaw; two children: Denise Hall and husband Lee of Palmyra, MO and Brian Shaw of Salem, MO; one brother: Roy Shaw and wife Louise of Boss, MO; sisters-in-law: Robin Miller and husband Bob and Nancy P. and husband Bob; three grandchildren: Levi Shaw, Chelsea Shaw, and Piper Hall; special friends: Sabrina Baker, Steve and Martha Harmon, and Carol Domeyer; two nephews: Kyle and Matt Miller; other relatives and friends. Preceding him in death were his, parents: Erman and Norma Shaw; stepmother: Betty Jean Shaw and stepbrother: Weston Disbrow. Coy will be remembered for the love he had for his family and friends. He will be deeply missed but fondly remembered by all who knew and loved him. Funeral Services for Coy Erman Shaw were held Thursday, May 7, 2020 in the Wilson Mortuary Salem Chapel with Pastor Lyndell Decker officiating. Song selections played were "Story of My Life", "Home", "Gone Gone Gone", and "Shriners Convention". Serving as Pallbearers were Johnny Shaw, Seth Melton, Joe King, Melvin Arganbright, J. Clark, Steve Harmon, Larry Shaw, and Steve Harmon. Honorary Pallbearers were Brian Shaw and Lee Hall. Burial was in the Weese Cemetery. Arrangements were under the direction of Wilson Mortuary of Salem, Missouri. In lieu of flowers, Memorial Contributions may be made in memory of Coy Erman Shaw and left at Wilson Mortuary. Online condolences may be entered at wilsonmortuary.com

Coy Erman Shaw was born on December 18, 1959, in Salem, Missouri to Erman Lavern and Norma (Prater) Shaw and passed away on May 1, 2020, in Fenton, Missouri at the age of sixty years. Coy grew up and attended school in Salem, Missouri. He married... View Obituary & Service Information

The family of Coy Erman Shaw created this Life Tributes page to make it easy to share your memories.

Send flowers to the Shaw family.