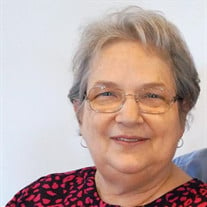 Cynthia Gail (Lynn) Hubbs was born on June 1, 1948 in Philadelphia, Tennessee to Lee Jackson and Ruth (Vaughn) Lynn. Gail grew up in Loudon, Tennessee and graduated with the class of 1966 from Loudon High School. After high school, Gail moved to Washington D.C. and worked for the F.B.I. Gail met her sweetheart, Joe Lee Hubbs, while he was in the military. The two fell in love and were united in marriage on November 25, 1967 in Washington D.C. and together shared fifty-four years of memories. Gail and Joe were blessed with three sons: Joseph, William, and Matthew. Gail and Joe moved to Salem, Missouri in January of 1968 and raised their family. She was a loving wife and dedicated mother and took great pride in caring for her home. Gail worked as a Pharmacy Tech for Wal-Mart and retired after twenty-two years. Her family was most important to her; she truly enjoyed watching her grandbabies excel and grow. Gail cherished the time spent with them and treasured the memories they made together. Gail was a devoted Christian who supported her husband in his ministry at Dry Fork Baptist Church. She served her church in many capacities throughout the years to include, keeping records as the church clerk, teaching classes, and serving in the kitchen for dinners. Gail was known for her famous raisin pies. Gail departed this life on April 10, 2022 in Salem, Missouri at the age of seventy-three years. She leaves behind to cherish her memory, loving husband Joe Hubbs of Salem, MO; three sons: Joseph Todd Hubbs and wife Jonni of Kansas City, MO, William Hubbs and wife Angel of Salem, MO, and Matthew Hubbs and wife Emily of Orlando, FL; two brothers: Sam Lynn and wife Debbie of Loudon, TN and Ronnie Lynn and wife Linda of Philadelphia, TN; one sister: Jane Lynn Massey of Fredericksburg, VA; five grandchildren: Madyson, Logan, Jordan, Luke, and Marcus; as well as a host of nieces, nephews, cousins, other relatives, and dear friends. Preceding her in death, parents: Lee and Ruth Lynn; brothers: Jim, Larry, and Doug Lynn; and brother-in-law: J.T. Massey. Gail had a big heart filled with compassion, love and kindness. She would do anything to help others and was a blessing to those around her. Gail was truly beautiful inside and out and will be deeply missed. Funeral Services for Cynthia Gail (Lynn) Hubbs were held Tuesday, April 12, 2022 in the Wilson Mortuary Salem Chapel with Richard LaBrash, Sr. officiating. Song selection played was “I’ll Fly Away” and special music was provided by Melinda Medlock. Serving as Pallbearers were Dennis Inman, Danny Medlock, Logan Hubbs, Jeff Curley, Jason LaBrash, and Justin Hubbs. Burial was in the Dry Fork Cemetery. Arrangements were under the direction of Wilson Mortuary of Salem, Missouri. Memorial Contributions may be made in memory of Gail Hubbs to Dry Fork Baptist Church or Dry Fork Cemetery and left at Wilson Mortuary. Online Condolences may be entered at www.wilsonmortuary.com

Cynthia Gail (Lynn) Hubbs was born on June 1, 1948 in Philadelphia, Tennessee to Lee Jackson and Ruth (Vaughn) Lynn. Gail grew up in Loudon, Tennessee and graduated with the class of 1966 from Loudon High School. After high school, Gail moved... View Obituary & Service Information

The family of Cynthia Gail (Lynn) Hubbs created this Life Tributes page to make it easy to share your memories.

Send flowers to the Hubbs family.