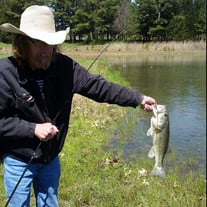 David "Dave" Keith Blankenship was born October 26, 1959 in St. Louis, Missouri to Bob and Dorlene (Major) Blankenship and passed away August 20, 2019 in Springfield, Missouri at the age of fifty-nine years. Dave grew up in the Salem area and attended school at Green Forest R-2 and Salem R-80. He was the first person allowed to graduate from Salem R-80 early. On June 16, 1979 Dave was united in marriage to Brenda Halbrook at the Montauk State Park in Montauk, Missouri. They shared forty years of marriage together and were blessed with two children, Desirae and Kris. Dave worked hard to support his family. He was the maintenance supervisor for Salem R-80 School from 1983 until he retired in 2014 after 31 years. Dave was a talented carpenter and enjoyed working with wood. He loved the outdoors and when he wasn't working, you could find him in the woods hunting or at the river fishing, gigging or floating. Dave also had a love for music and enjoyed playing guitar and singing karaoke. Most of all Dave's greatest treasure was spending time with his family. There was not a day within his life that he was not proud of his family. He thought the world of his two children and adored his grandchildren. Dave was a member of Salem Eagles Club and the American Legion. He was also a member of Corinth Baptist Church. Preceding him in death were his father Bob Blankenship; grandparents Armenta May and Oatley Blankenship and Glen and Verna Major. Dave is survived by his loving wife: Brenda Blankenship of Salem, MO; two children: Desirae Owens and husband Toby of Salem, MO and Kris Blankenship and wife Cassie of Salem, MO; mother: Dorlene Blankenship of Salem, MO; five siblings: Bob Blankenship and wife Cathy of Kimberling City, MO, Ron Blankenship and wife Gaye Lynn of Salem, MO, Karen Givens and husband Art of Salem, MO, Steve Blankenship and wife Cathy of Licking, MO and Daniel Blankenship of Salem, MO; five grandchildren: Shyan Owens, Kaydance Owens, Daniel Blankenship, Dalton Blankenship and Alexis Blankenship; many nieces, nephews, cousins, extended family and friends. Dave was a loving husband, proud father and caring grandfather. He was loved unconditionally and will be forever missed by his family all those who knew him. Funeral Service for David "Dave" Keith Blankenship was held Friday, August 23, 2019 in the Wilson Mortuary Salem Chapel with Bro. Billy Miller officiating. Song Selections played were "When I Get Where I'm Going", "If You Get There Before I Do" and "It's A Wonderful World" All arrangements were under the direction of Wilson Mortuary of Salem, Missouri.

David "Dave" Keith Blankenship was born October 26, 1959 in St. Louis, Missouri to Bob and Dorlene (Major) Blankenship and passed away August 20, 2019 in Springfield, Missouri at the age of fifty-nine years. Dave grew up in the Salem area... View Obituary & Service Information

The family of David "Dave" Keith Blankenship created this Life Tributes page to make it easy to share your memories.

Send flowers to the Blankenship family.