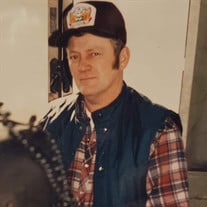 David Paul Golden was born September 26, 1944 in Evansville, Indiana to Lester and Ethel Golden and departed this life March 28, 2021 at the age of seventy-six years. David entered the United States Army October 28, 1966 and served his country faithfully until his honorable discharge October 27, 1972. During his time in the military he earned several medals to include: Expert Badge, National Defense Service Medal, and Good Conduct Medal. David was united in marriage to the love of his life, Joyce Emma Conaway, October 25th, 1988 and together shared thirty-two years of memories and were blessed with four children: Lisa, Wesley, Dean, and Dale. David was a hard worker and worked for Burlington Northern Railways for forty-two years. Along the way he met many good friends whom he kept in contact with through the years. After retirement David enjoyed life by spending time in the woods riding four wheelers, hunting, target practicing on his shooting range, back roading in his old Dodge Ram Charger, camping, playing his guitar, and singing. He would tell everyone about his home saying, “It’s as close to heaven as you can get on earth.” David enjoyed and truly loved his family and friends. He spent many days with his wife roaming the woods and exploring for minerals, artifacts, and mushrooms. They would take a picnic lunch and stay gone for hours enjoying each other’s company. Many times, their kids, grandkids, and even great-grandkids would go on explorations with them in the woods around the area. The highlight of any deer or turkey season was camping on Mark Hout where many dinners were held with friends and family gathered around. David would build a fire and pull out his Gibson Hummingbird guitar and play with everything he had. He played his favorite; Seven Spanish angels, along with songs from Merle, Conway, and David Allan Coe. Music was dear to him and he enjoyed playing for others. David had a very special relationship with his mother Ethel. They shared an interest in music and she would sing with him while he played the guitar. Even though his mom lived in Indiana they made sure they traveled back and forth often to visit one another. David was well known for his humor and wit. This no doubt is the reason people were drawn to him. Anyone that knew him knew if you saw him coming you would have to be on your toes to outsmart his sense of humor. Dave had a nickname for everyone, such as The Boss Chicks, Korky, The Terrorist, Crazy Helen, Fleabag, and many more that probably aren’t appropriate to write here. He was always prepared to give his friends and family a “hard way to go” and they loved every minute of it. David is survived by his loving wife Joyce Golden of the home; children: Lisa Wisdom and husband Barry of Dixon, MO, Wesley Snider of Boss, MO, Dean Golden and wife Natalie of St. James, MO, Dale Golden and wife Elgeana of Cuba, MO; brothers-in-law: Noris Gray of Evansville, IN, Cleo Conaway of St. Clair, MO; sister-in-law: Ruth Henry of Troy, MO; grandchildren: Ryan, Roxanna, Tricia, Joshua, Jacob, James, Jeremy, Shelby, Austin, Mariah, Brennan; a host of great-grandchildren; special niece: Patricia and Dewayne Overton of Texas; as well as many nieces, nephews, aunts, uncles, and friends. David is preceded in death by his parents: Lester “Bliss” and Ethel Golden and sister: Doris Gray. In the last days of his life David fought long and hard to overcome his illness. He was visited by many family and friends. He would speak to his neighbors almost daily as they called to check on him. These were the highlights of his days. Thank you to all who there to help him along the way. In his last hours, David gave his life to God. He could not speak but he gave a few hand squeezes to let us know his wishes. Shortly after, God took him home, peacefully. Funeral Services for David Paul Golden were held Friday, April 2, 2021 in the Wilson Mortuary Viburnum Chapel with Pastor Adam Asher officiating. Special Music was provided by great-granddaughter Allie singing “Lead Me Home”; additional song selections played were “Seven Spanish Angels”, “Go Rest High On That Mountain”, and “Long Black Train”. Serving as Pallbearers were Dean Golden, Dale Golden, Jory Hock, Wesley Snider, Dewayne Overton, Barry Wisdom, Terry Wolfe, and Colton Overton. Burial was in the Stone Hill Cemetery. Arrangements were under the direction of Wilson Mortuary of Viburnum, Missouri. Online condolences may be entered at wilsonmortuary.com

David Paul Golden was born September 26, 1944 in Evansville, Indiana to Lester and Ethel Golden and departed this life March 28, 2021 at the age of seventy-six years. David entered the United States Army October 28, 1966 and served his country... View Obituary & Service Information

The family of David Paul Golden created this Life Tributes page to make it easy to share your memories.

Send flowers to the Golden family.