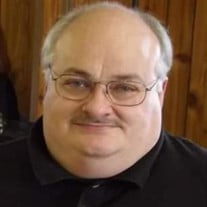 Dennis Keith Bennett was born June 19, 1962 in Houston, Texas to Harry and Betty (Lanier) Bennett. He grew up in Warsaw, North Carolina and at the age of nineteen entered the United States Marine Corp where he served his country faithfully until his honorable discharge. Dennis was united in marriage to his sweetheart, Katharine “Kathy” Bacon on September 15, 2000 in Salem, Missouri and together they shared nearly twenty-one years of marriage. Dennis and Kathy and were blessed to share four children: Michael, Kathleen, Logan, Dakota Dennis was a hard worker and employed as a corrections officer with South Central Correctional Center. He served as a Pastor for a time, ministering at several local churches. Dennis deeply cared for his congregation and truly enjoyed his time there ministering to the community. Dennis’ hobbies include fishing, hunting, shooting rifles and bows. His family was most important to him and he cherished the time making memories with them, especially with his grandchildren. Dennis departed this life on August 12, 2021 at the Salem Memorial District Hospital at the age of fifty-nine years. He leaves behind to cherish his memory, loving wife: Kathy Bennett of the home; children: Michael Holmes, Kathleen Holmes, Logan Parrish, and Dakota Bennett; mother: Betty Long; siblings: Bernice Desmond, Linda Watson, and Wayne Bennett; four grandchildren; extended family and friends. Preceding him in death were his, father: Harry Bennett and siblings. Dennis will be forever missed by all who knew and loved him. Funeral Services for Dennis Keith Bennett were held Sunday, August 15, 2021 in the Wilson Mortuary Salem Chapel with Pastor Lyndell Decker officiating. Military Honors was provided by the Missouri Military Honors Team and American Legion Post 99. Additional assistance was provided by the Missouri Law Enforcement Funeral Assistance Team. Arrangements were under the direction of Wilson Mortuary of Salem, Missouri. Memorial Contributions may be made in memory of Dennis Bennett and left at Wilson Mortuary. Online Condolences may be entered at www.wilsonmortuary.com

Dennis Keith Bennett was born June 19, 1962 in Houston, Texas to Harry and Betty (Lanier) Bennett. He grew up in Warsaw, North Carolina and at the age of nineteen entered the United States Marine Corp where he served his country faithfully until... View Obituary & Service Information

The family of Dennis Keith Bennett created this Life Tributes page to make it easy to share your memories.

Send flowers to the Bennett family.