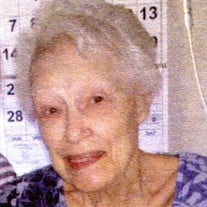 Devetia Evelyn (Martin) Condray was born on May 20, 1925, in Dent County, Missouri to Ben and Yitti (Bressie) Martin and passed away on December 14, 2019, in Rolla, Missouri at the age of ninety-four years. Devetia grew up milking cows on the family farm in Salem, Missouri and graduated from Salem High School. She met and married John Condray and had one son, John Condray Jr. Family get-togethers were important to her, she deeply cherished her time spent with family and making memories with them. Together they enjoyed time at the lake fishing, boating and camping. She had a love for cooking and made many family meals, to include: fried chicken, fried liver, pork chops and German chocolate cake. Devetia was proud of her family and their accomplishments. During her working years, Devetia taught at Mt. Hermon School, was a Rural Route Postal Carrier and retired as a seamstress from Barard's Lingerie after twenty-three years of employment. Devetia loved the Dent County Community and was an instrumental part in the creation of the Dent County Commons. She took great pride in her part of providing something for the community to enjoy. Devetia was a proud member of First Baptist Church in Salem, a charter member of the Salem Eagles Club, 70+ year member of the Eastern Star and 25+ year member of the White Shrine. Devetia enjoyed spending time outdoors watching the hummingbirds or feeding the catfish. She was known for her green thumb and loved tending to her flower gardens and growing strawberries. Devetia had a talent for knitting and created many items throughout the years. She was a friend to many, and an avid bingo player at Rolla Presbyterian Manor. Devetia is survived by one son: John "J.B." Condray Jr. of Florida; two grandchildren: Michelle Guess of Kentucky and John Condray III and wife Adrianne of Kentucky; one great-grandson: John Burton Condray IV of Kentucky; as well as many nieces, nephews, extended family and friends. Preceding her in death, her parents: Ben and Yitti Martin; brother: Arliss Martin and wife Ruth. Devetia will be remembered as a loving mother, grandmother, and great-grandmother. She will be deeply missed by all who knew and loved her. Funeral Service for Devetia Evelyn (Martin) Condray was held Thursday, December 19, 2019 in the Wilson Mortuary Salem Chapel with Pastor Michael York and J.J. Tune officiating. Special music was provided by Anne Emory and Joy Parker. Serving as Pallbearers were John Condray III, John Burton Condray IV, Joy Martin, Pat Campbell, Bill Wood, Ed Wood, and Ed Pratt. Burial was in the Cedar Grove Cemetery. All arrangements were under the direction of Wilson Mortuary of Salem, Missouri.

Devetia Evelyn (Martin) Condray was born on May 20, 1925, in Dent County, Missouri to Ben and Yitti (Bressie) Martin and passed away on December 14, 2019, in Rolla, Missouri at the age of ninety-four years. Devetia grew up milking cows on the... View Obituary & Service Information

The family of Devetia Evelyn (Martin) Condray created this Life Tributes page to make it easy to share your memories.

Send flowers to the Condray family.