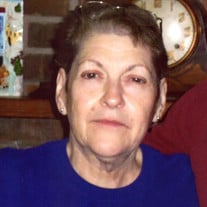 Diane Rae (Stagner) Fouty was born on November 22, 1948, in Boss, Missouri to Rae and Alpha (Pryor) Stagner and passed away on February 4, 2021 in Salem, Missouri at the age of seventy-two years. Diane grew up in Boss and moved to Florida with her family at the age of thirteen. She met the love of her life, Elmus William “Bud” Fouty, at the age of nineteen and was united in marriage on January 20, 1968 in Clearwater, Florida. Together Diane and Bud shared fifty-three years of memories and were blessed with one daughter, Tammy. Diane took great pride in caring for her family, in her early working years she was CNA for nursing homes in Florida and then Salem Care Center. Diane was then employed with Wal-Mart for twenty years; she started unloading trucks and then moved to the deli department. Diane always had a smile on her face and enjoyed serving her customers. Diane was a woman of faith and attended Grace Community Church. Diane liked working with her hands and enjoyed embroidery. You would often find her reading or tending to her flower beds. Diane loved cooking for her family and truly cherished family gatherings. Most important to her was her family, she treasured the memories made together, especially with her grandchildren and great-grandchildren. Diane is survived by her loving husband Bud Fouty of Salem, MO; daughter: Tammy Schmitt and husband Wendell of Salem, MO; brother: Ricky Maddox and wife Robin of Delaware; sister: Elaine Mallory and husband Kenny of California; sisters-in-law: Judy Ponds of Florida and Sharene O’dell of Florida; granddaughter: Nicole Stafford and husband Dustin of Salem, MO; great-grandchildren: Olivia Ragsdale, Dusty Stafford, Randy Stafford, and Emmett Stafford; as well as a host of nieces, nephews, cousins, other relatives, and friends. Preceding her in death, parents: Rae Stagner and Alpha Maddox; granddaughter: Emily Ragsdale; brothers: Jerry O’dell, Jimmy O’dell, and Billy Maddox; brother-in-law: Thomas Ponds; sisters-in-law: Naomi, Beatrice, and Dot. Diane was a wonderful, sweet lady and will surely be missed by many. Funeral Services for Diane Rae (Stagner) Fouty were held Wednesday, February 10, 2021 in the Wilson Mortuary Salem Chapel with Rhonda Barnes officiating. Song selections played were “Wordless”, “Jealous of the Angels”, and “I Can Only Imagine”. Serving as Pallbearers were David Carter, Robert Carter, Dustin Stafford, Dusty Stafford, Quintin Maddox, and Silas Stricklin. Honorary Pallbearers were Ricky Maddox and Bobby Carter. Burial was in the Boss Cemetery. Arrangements were under the direction of Wilson Mortuary of Salem, Missouri. Online condolences may be entered at wilsonmortuary.com

Diane Rae (Stagner) Fouty was born on November 22, 1948, in Boss, Missouri to Rae and Alpha (Pryor) Stagner and passed away on February 4, 2021 in Salem, Missouri at the age of seventy-two years. Diane grew up in Boss and moved to Florida with... View Obituary & Service Information

The family of Diane Rae (Stagner) Fouty created this Life Tributes page to make it easy to share your memories.

Send flowers to the Fouty family.