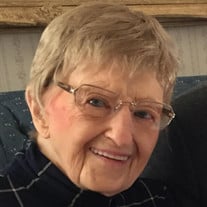 Dixie Lee (Williams) Miller was born September 26, 1926 in Jamison, Missouri to Fred and Ina (Beasley) Williams and passed away March 17, 2020, at Rolla Health and Rehab in Rolla, Missouri at the age of ninety-five years. Dixie grew up in Dows, Iowa. She met the love of her life, George Garth Miller and they were united in marriage on November 18, 1944 in Seattle, Washington. George and Dixie shared sixty-nine years of marriage before his passing on June 3, 2013 and were blessed with two children: Dani and G. Garth Jr. Throughout her life, Dixie was a homemaker and proudly raised her family before starting a catering business at Northwestern University. With George by her side they ran this business for fifteen years serving high profile sports and government figures. Dixie was known as being a wonderful cook and enjoyed spending time serving the community. Dixie was strong in her faith and a faithful member of Salem United Methodist Church. She loved the Ladies Circle and fellowship there. Dixie and George had a passion for traveling; they visited forty-nine states, Mexico, Canada, and Europe several times. Above all, Dixie had a special place in her heart for her family, especially her grandchildren and great-grandchildren. She treasured her time spent with them. Dixie is survived by her two children: Dani Commendador and husband Mark of Colorado Springs, CO and G. Garth Miller, Jr. and wife Geri of Salem, MO; seven grandchildren; thirteen great-grandchildren; extended family and friends. Preceding her in death were, her loving husband George Garth Miller Sr.; parents: Fred and Ina Williams; one brother and two sisters. Dixie will be remembered as a dedicated wife, loving mother, caring grandmother and great-grandmother, sister and friend. She will be truly missed by all who knew and loved her. A Memorial Service will be held in Clarion, Iowa at a later date. Arrangements are under the direction and care of Wilson Mortuary of Salem, Missouri. Online condolences may be entered at www.wilsonmortuary.com

Dixie Lee (Williams) Miller was born September 26, 1926 in Jamison, Missouri to Fred and Ina (Beasley) Williams and passed away March 17, 2020, at Rolla Health and Rehab in Rolla, Missouri at the age of ninety-five years. Dixie grew up in Dows,... View Obituary & Service Information

The family of Dixie Lee (Williams) Miller created this Life Tributes page to make it easy to share your memories.

Send flowers to the Miller family.