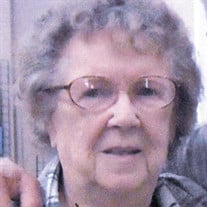 Dorothy (Warden) Bowers was born on October 19, 1918, in Dent County, Missouri. She was the youngest of three children born to William and Ferdona (Gamblin) Warden. On September 26, 1938, Dorothy was united in marriage to her loving husband, Cecil Bowers in Farmington, Missouri. Dorothy and Cecil shared fifty-seven years of wonderful memories before his passing on January 19, 1996. They were blessed with one son, Bill. Dorothy's early married years consisted of traveling from Salem to St. Louis and also Chicago quite often with Cecil's job. She made the statement that she didn't unpack her suitcase for ten years, until Bill was born. Her working years were spent in factories, including approximately ten years at International Shoe Factory. Dorothy loved reading books and enjoyed watching TV when her favorite shows were on which include, "Little House on the Prairie", "The Andy Griffith Show", and John Wayne movies. She was a great cook and enjoyed making delicious meals for her loved ones. Dorothy enjoyed going to yard sales and looking for treasures. She loved working crossword puzzles and playing games. It was told Dorothy always won the games she played or she would change the rules to make sure she won. Dorothy cherished time spent with her family and friends and held those memories close to her heart. She attended Salem United Baptist Church. Dorothy departed this life on June 17, 2021, at the Salem Long Term Care Center at the age of one hundred-two years. She leaves behind to cherish her memories, loving son: Bill Bowers and wife Sandy of Salem, MO; grandson: Rick Johns and wife Jackie of Bend, OR; nephews and nieces: Joe, Andy, Susan, Cathy and Evelyn, and special niece Darleen; as well as many friends and loved ones. Dorothy is preceded in death by, husband: Cecil Bowers; parents: William and Ferdona Warden; grandson: Stanley Johns; siblings: Howard Warden and wife Viola, and Violet Warden Bowers and husband Leroy; nieces: Francine Moldt and Sonja Sue Bowers Ginn; and nephew: Jim Bowers. Dorothy was a very independent woman who was devoted to her family. She will be dearly missed by all who knew and loved her. Funeral Services for Dorothy (Warden) Bowers were held Tuesday, June 22, 2021 in the Wilson Mortuary Salem Chapel with Pastors David Gidcumb and Noah Schlag officiating. Special letter from Grandson Ricky was shared. Special Music was provided by Steve Connors singing “Go Rest High On That Mountain” and “What A Day That Will Be”. Serving as Pallbearers were Cliff Brown, Jim Halbrook, Dwayne Land, Rodney Land, Scott Land, and Jerry Bluhm. Honorary Pallbearers were Ervin Halbrook and Aaron Steelman. Burial was in the Warden Cemetery. Arrangements were under the direction of Wilson Mortuary of Salem, Missouri. Memorial Contributions may be made in memory of Dorothy Bowers to Warden Cemetery Fund and left at Wilson Mortuary. Online condolences may be entered at wilsonmortuary.com

Dorothy (Warden) Bowers was born on October 19, 1918, in Dent County, Missouri. She was the youngest of three children born to William and Ferdona (Gamblin) Warden. On September 26, 1938, Dorothy was united in marriage to her loving... View Obituary & Service Information

The family of Dorothy (Warden) Bowers created this Life Tributes page to make it easy to share your memories.

Send flowers to the Bowers family.