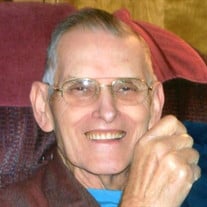 Doyle Emmery Henson was born October 12, 1931 in West Fork, Missouri to Lemuel Benjamin and Alice Cordela (Barton) Henson and passed away June 2, 2019 at Seville Care Center in Salem, Missouri at the age of eighty-seven years. Doyle attended schools in St. Louis and Centerville, Missouri. He was baptized and joined the Missionary Baptist Church at Crossville, Missouri in the mid 1940's. On December 5th, 1953, Doyle was united in marriage to Wanda Mae Holt and to this union one daughter, Diana, was born. Doyle and Wanda shared 65 wonderful years of marriage together. Doyle joined the United States Navy in 1949 and spent 4 years active duty. He was proud to be part of the Seabees. Doyle was part owner in a barber shop in Springfield, Missouri in the 1950's. He then moved to Sullivan, Missouri where he continued barbering and construction until 1973. He then relocated to Boss, Missouri where he spent 43 years in the beautiful Ozarks. Doyle loved to fish, travel, and garden. He loved bluegrass and country music. Doyle enjoyed reading, studying and learning the Bible, and sharing God's love with friends and family. He was a member of the Masonic Lodge in Sullivan, Missouri and also worked with the Optimist Club in Sullivan. Preceding him in death were his parents, Lemuel and Alice Henson; sisters, Pauline Kirikos and Geraldine Adams. Doyle is survived by his loving wife, Wanda Henson of the home in Salem, MO; one daughter, Diana Bouse and husband, Lloyd "Ed" of Thomson, GA; three grandchildren, Steven Bouse and wife, Jessica of Evans, GA, Jason Bouse and wife, Junko currently serving in the Air Force and stationed in London, England, and Julie Mercado of Irmo, SC; four great grandchildren, Carlos Mercado, Yushin Bouse, Sara Bouse, and Landon Bouse; other relatives and friends. Doyle will be sadly and deeply missed, but fondly remembered by all those who knew and loved him. Private Family Graveside Service for Doyle Emmery Henson was held Saturday, June 22, 2019 at the West Fork-Sutterfield Cemetery with Pastor Paul Davis officiating. Military Honors was provided by the American Legion Post 99. All arrangements were under the care and direction of Wilson Mortuary Salem, Missouri.

The family of Doyle Emmery Henson created this Life Tributes page to make it easy to share your memories.

Send flowers to the Henson family.