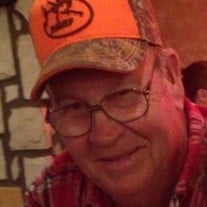 Doyle Gene Turner was born July 13, 1943, in Corridon, Missouri to Wallace Arthur and Rosalie Fern (Smith) Turner and passed away September 6, 2020, at his home in Salem, Missouri surrounded by his loving family at the age of seventy-seven years. Doyle grew up and attended school in Bunker. He was united in marriage to his sweetheart, Phyllis Ann Wisdom on April 26, 1975 and together shared thirty-seven years of marriage before her passing on December 18, 2012. Doyle and Phyllis were blessed with one daughter: Kristina. Doyle took great pride in caring for his family, he worked as a foreman with Timber Charcoal Company for many years. Doyle was an honest man, role model and a hard worker. The best part about his job was being able to work with his family and drive the big trucks. Doyle was an avid outdoorsman. He liked to be in the woods hunting and at Lake Huzzah fishing with his grandchildren. He was a proud supporter of the Rocky Mountain Elk Foundation and a lifetime member of the NRA. Doyle was a faithful member of Salem Faith Assembly and served as a Deacon for several years. He enjoyed playing the guitar and collecting knives. Most important to Doyle was his family, he deeply cherished his time spent with them, especially his grandchildren. Doyle is survived by his loving daughter: Kristina Nakanishi and husband Ken of Rolla, MO; grandchildren: Emily Nakanishi of Rolla, MO and Ryan Nakanishi of Springfield, MO; siblings: Cecil Turner of Salem, MO, Judy Hamilton and husband Quentin of Timber, MO, Ronald Turner and wife Laverne of Farmington, MO, Karen Anderson and husband Billy of Salem, MO, Anna Hasty of Timber, MO, Paul Turner and wife Donna of Salem, MO; sister-in-law: Joan Blevins of Wylie, TX; brother-in-law: Lester Wisdom of Ellington, MO; as well as several loving nieces, nephews, other relatives and friends. Preceding him in death, his wife: Phyllis Ann Turner; his parents: Wallace and Rosalie Turner; siblings: Junior Ray Turner and infant brother Jerry; father and mother-in-law: Lester Sr. and Berniece Wisdom. Doyle leaves behind a legacy of love and integrity that has been, and will continue to be, an inspiration to his family for many generations to come. Funeral Services for Doyle Gene Turner were held Thursday, September 10, 2020 in the Wilson Mortuary Salem Chapel with Pastor Billy Anderson officiating and granddaughter Emily Nakanishi reading the eulogy. Song selection played was “Amazing Grace” Serving as Pallbearers were Ryan Nakanishi, Ken Nakanishi, James Reese, Charles Reese, Brandon Turner, Christopher Hamilton, Alex Hamilton, and Todd Hamilton. Honorary Pallbearer was Anthony Albert. Burial was in the Jane Callahan Cemetery. Arrangements were under the direction of Wilson Mortuary of Salem, Missouri. Memorial Contributions may be made in memory of Doyle Gene Turner and left at Wilson Mortuary. Online condolences may be made at www.wilsonmortuary.com

Doyle Gene Turner was born July 13, 1943, in Corridon, Missouri to Wallace Arthur and Rosalie Fern (Smith) Turner and passed away September 6, 2020, at his home in Salem, Missouri surrounded by his loving family at the age of seventy-seven years. Doyle... View Obituary & Service Information

The family of Doyle Gene Turner created this Life Tributes page to make it easy to share your memories.

Send flowers to the Turner family.