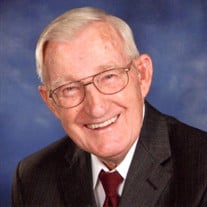 Dwane Hamilton Whitaker was one of three babies born March 10, 1933 at home in Nemaha, Nebraska to Dow Oswald and Bertha (McCullough) Whitaker. He moved to Salem, Missouri at the age of ten and made Salem his home. Dwane entered the United States Army April 7, 1953 and served his country faithfully until his honorable discharge March 18, 1955. Dwane was united in marriage to Donna C. Willis July 19, 1957 in Salem, Missouri and shared sixty-four years of marriage. Dwane and Donna were blessed with one son, Douglas. Dwane worked hard to provide for his family, he was employed with Craig Distributing and retired from Kraft Foods after forty-one years of dedication. Dwane liked spending time outdoors taking care of his yard. He enjoyed gardening, working his flower beds, and took great pride in his iris’. Dwane was a great Christian man and longtime member of Pleasant Valley Baptist Church where he served as deacon for many years. His faith and family were most important to him, he was a devoted husband, had a close relationship with his son and treasured his granddaughters and great-granddaughter. Dwane departed this life September 22, 2021 in Salem, Missouri at the age of eighty-eight years. He leaves behind to cherish his memory his loving wife Donna Whitaker of the home; son: Douglas Whitaker and wife Kelly of Manchester, MO; granddaughters: Lauren Whitaker-Donahue and husband Mark of Cypress, TX and Kristen Whitaker of Manchester, MO; great-granddaughter: Hazel Whitaker-Donahue; sisters: Verna Garvey of Oak Grove, MO and Virginia Burton of Douglas City, CA; extended family and dear friends. Preceding him in death, his parents: Dow and Bertha Whitaker; and several siblings. Dwane always had a smile and a kind word to share, his gentle spirit and good heart will never be forgotten. Private Graveside Services for Dwane Hamilton Whitaker were held Monday, September 27, 2021 in the Cedar Grove Cemetery with Pastor Mark Johnson officiating. Special Music was provided by Jeremiah and Rachel Privett. Honorary Pallbearers were Mike Walther, Jacob Walther, Matthew Walther, Ryan Whitaker, Marvin Sutter, Eldon Flett, Clark Gibbs, Jim Edwards, Jim Wood, Jacob Shafer, and Brady Schafer. Military Honors were provided by the American Legion Post 99 and the Missouri Honors Team. Arrangements were under the direction of Wilson Mortuary of Salem, Missouri. In lieu of flowers, Memorial Contributions may be made in memory of Dwane Whitaker to Pleasant Valley Baptist Church or the American Heart Association and left at Wilson Mortuary. Online Condolences may be entered at www.wilsonmortuary.com

Dwane Hamilton Whitaker was one of three babies born March 10, 1933 at home in Nemaha, Nebraska to Dow Oswald and Bertha (McCullough) Whitaker. He moved to Salem, Missouri at the age of ten and made Salem his home. Dwane entered the United States... View Obituary & Service Information

The family of Dwane Hamilton Whitaker created this Life Tributes page to make it easy to share your memories.

Dwane Hamilton Whitaker was one of three babies born March 10,...

Send flowers to the Whitaker family.