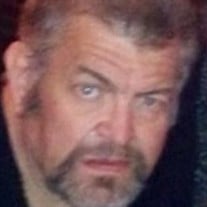 Dwayne “Scoop” Leslie McClellan was born to Earl and Rowena (Keasling) McClellan on September 3, 1961 in Albany, Missouri and passed away August 5, 2019 at the Missouri Baptist Medical Center in St. Louis, Missouri at the age of fifty-seven years. Scoop grew up in Grant City, Missouri and graduated with the Class of 1979 at Worth County School. He went on to continue his education at North West Missouri University obtaining his bachelors degree. Scoop married the love of his life, Cathy Irons on November 19, 1993 in Salem, Missouri and shared twenty-five wonderful years of marriage. Scoop took a job as editor at The Salem News in June 1984, writing news and feature stories covering Salem Tiger sports. He captured the lives of many until his retirement in September of 2014. Scoop was always available, always on the job and well respected by the people he covered during his thirty years of journalism. He had a love for sports and it showed; Scoop proudly supported the Salem Tigers. He was a fan of the Kansas City Chiefs and the Kansas City Royals. Scoop really enjoyed watching football and basketball. He was an avid baseball card collector and a member of the Lions Club. Preceding him in death were his grandparents and his parents: Earl and Rowena McClellan. Scoop is survived by his loving wife: Cathy McClellan of Salem, MO; one sister: Trisha Knight of Gentry, MO; one brother: Robert McClellan and wife Melissa of Barnard, MO; three brother in laws: Kurt Irons and wife Beverly of Salem, MO; Gregg Irons of Salem, MO and Richard Gregg and wife Martine of Salem, MO; five nephews: Thomas Knight of Grant City, MO, Andy Knight of Grant City, MO, Chris Linss and wife Laura of Californa, Kurt Irons III and wife Sholeh of California and Ricky Gregg of Salem, MO; two nieces: Joylynn Irons of California and Morrigan Gregg of Salem, MO; great nieces and nephews: Gavin, Aidan and Ava Linss; extended family and friends. Scoop was a devoted husband, caring brother and loving uncle. He will be fondly remembered and greatly missed by all who knew and loved him. Funeral Service for Dwayne "Scoop" Leslie McClellan was held Friday, August 9, 2019 in the Wilson Mortuary Salem Chapel with Pastor Chris Hendrix officiating. Song selections played were "Amazing Grace", "How Great Thou Art", and "I'll Fly Away". Serving as Pallbearers were: Chris "Kurt" Irons, Richard "Dickie" Gregg, Randy McClellan, Donnie McClellan, Ricky McClellan, Barry McClellan, Larry Chilton and Robert Simpson. Honorary Pallbearers were: Gregg Irons and Robert McClellan. Burial was in the Cedar Grove Cemetery. All arrangements were under the care and direction of Wilson Mortuary of Salem, Missouri.

Dwayne &#8220;Scoop&#8221; Leslie McClellan was born to Earl and Rowena (Keasling) McClellan on September 3, 1961 in Albany, Missouri and passed away August 5, 2019 at the Missouri Baptist Medical Center in St. Louis, Missouri at the age of... View Obituary & Service Information

The family of Dwayne "Scoop" Leslie McClellan created this Life Tributes page to make it easy to share your memories.

Send flowers to the McClellan family.