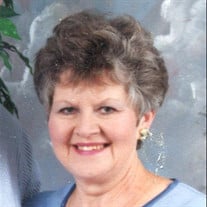 Earlene York was born on September 25, 1946, in Jefferson City, Missouri to Earl and Lillian “Alene” (Vineyard) Groves and passed away December 1, 2019, in Salem, Missouri at the age of seventy-three years. Earlene grew up and attended school in Dixon, Missouri and graduated with the Class of 1964. She was united in marriage on August 5, 1965, to Darrel York in Dixon, Missouri. Together they shared fifty-four beautiful years of marriage and were blessed with one daughter, Sheila. Earlene worked as a caregiver for family and friends and put her heart into her work. She took great pride in being a mother, homemaker, and a professional grandmother. Earlene's greatest joy was tending to her home and family. She was everyone's "Mommaw" but especially cherished the time spent with her grandchildren. She was a fun, loving, compassionate, one of a kind grandmother. Earlene enjoyed her time spent in her flower gardens. She had a green thumb, all that she planted grew to be beautiful and healthy. She was known as the "plant doctor" to her family and friends; she could revive about any plant. Earlene was a long-time member of New Home Baptist Church for over thirty-two years and enjoyed her fellowship there. Earlene and Darrel joined First Baptist Church of Salem where they continued to worship for several years. She had a passion for life and her faith. Earlene is survived by her loving husband: Darrel York of the home; one daughter: Sheila Martin of Salem, MO; two grandchildren: Kassidy Martin and special friend John Townsend of Salem, MO and Christian Martin of Salem, MO; two great-grandchildren: Karter Martin and Kole Martin; extended family and friends. Preceding her in death, were her parents: Earl and Lillian “Alene Groves and special aunt, Myrtle White. Earlene was a loving wife, mother, grandmother and great-grandmother. She will be remembered for her kind heart, selflessness, and compassionate spirit. She will be greatly missed by all who knew her. Graveside Service for Earlene York was held Tuesday, December 3, 2019, at the Dixon Cemetery with Pastor Charlie Younger officiating. Memorial Contributions may be made in memory of Earlene York to the Salem Care Center Activity Program and left at Wilson Mortuary. Online Condolences may be entered at www.wilsonmortuary.com

Earlene York was born on September 25, 1946, in Jefferson City, Missouri to Earl and Lillian &#8220;Alene&#8221; (Vineyard) Groves and passed away December 1, 2019, in Salem, Missouri at the age of seventy-three years. Earlene grew... View Obituary & Service Information

The family of Earlene York created this Life Tributes page to make it easy to share your memories.

Send flowers to the York family.