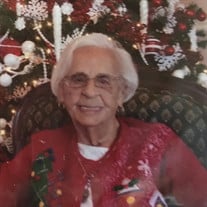 Edith Louise (Scheidemantel) Pickering was born on August 15, 1915, in Dent County Missouri to Charles and Agnes (McClelland) Scheidemantel and passed away on November 26, 2019, in Salem, Missouri at the age of one hundred three years. Edith grew up and attended school in Lenox, Missouri. She married the love of her life, Raymond Pickering on May 5, 1940, in Lebanon, Missouri and together they shared forty-one years of marriage until his passing September 17, 1981. They were blessed with five children: Sam, Barbara, Martha, and two infants. Edith's greatest joy was tending to her home and family, she took great pride in being a mother and a homemaker. She enjoyed her time spent in the kitchen cooking up meals and goodies for her family. Edith loved living on the farm raising animals and tending to her big garden. She was a long time, and the oldest living member, of First Baptist Church of Salem. She enjoyed attending Sunday School, loved worshiping with her Church Family and volunteering wherever she was needed. Edith had a love for the community and was an advocate for several organizations, especially the PTA. She was always trying to help someone else and never wanted praise or recognition. Most of all, she cherished the time spent with her grandchildren and great-grandchildren. Edith is survived by her children: Sam Pickering and wife Deanna of Columbia, MO, Barbara Brooks and husband Roger of Salem, MO, and Martha Grogan-Adams and husband Vance of Salem, MO; brothers: Carl Scheidemantel of St. Charles, MO, Raymon Scheidemantel and wife Jane of Lenox, MO, and Robert "Bob" Scheidemantel of Riverton, WY; five grandchildren: Dan Pickering and wife Amanda of Houston, TX, Mark Pickering and wife Amy of Palm Springs, CA, David Brown of Salem, MO, Melissa Allen of Nashville, TN and Tonya Hampton and husband Marty of Ellsinore, MO; eleven great-grandchildren; as well as several nieces, nephews, extended family and friends. Preceding her in death, were her husband Raymond Pickering; parents: Charles and Agnes Scheidemantel; two infant children; granddaughter: Anita and son-in-law: Jerry. Edith loved her family dearly and always made sure they had what they needed. She will be greatly missed by all who knew and loved her. Funeral Services for Edith Louise (Scheidemantel) Pickering were held Wednesday, December 4, 2019 in the Wilson Mortuary Salem Chapel with Pastor Michael York officiating. Music was provided by Ann Emory and Verna Cooper. Serving as Pallbearers were: Vance Adams, Travis Lynch, Dale Martin, Jay Clark, Dave Brown, and Dalton Brown. Honorary Pallbearers were: David Brown, Daniel Pickering, Brock Brown, and Blake Brown. Burial was in the Cedar Grove Cemetery. All arrangements were under the direction of Wilson Mortuary of Salem, Missouri.

Edith Louise (Scheidemantel) Pickering was born on August 15, 1915, in Dent County Missouri to Charles and Agnes (McClelland) Scheidemantel and passed away on November 26, 2019, in Salem, Missouri at the age of one hundred three years.... View Obituary & Service Information

The family of Edith Louise (Scheidemantel) Pickering created this Life Tributes page to make it easy to share your memories.

Send flowers to the Pickering family.