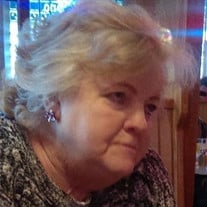 Edna Louise (Holloway) Albert was born on March 18, 1944 in Fairmount, Georgia to Earl Gene and Ruby (Few) Holloway and passed away October 21, 2019 at her home in Salem, Missouri at the age of seventy-five years. Edna grew up in the boot hills of Missouri. She was the proud mother of Danny, Mike, Teresa, Billy, Tina, Alex and Gary. She took great pride in caring for her family and didn't work outside the home until they were grown. Edna was a housekeeper and nanny for several families as well as a housekeeper at the school district and nursing home. On September 30, 2006, Edna married Winton "Butch" Albert and together shared ten years of marriage until his passing in 2016. Edna enjoyed being outside and tending to her flower gardens. She also loved to go out to eat at her favorite restaurants. She had a passion for shopping, especially for her grandchildren. Edna loved being a grandmother and treasured the time spent with her grandchildren. She was preceded in death by her husband: Winton "Butch" Albert; son: Alex Boyer; parents: Earl and Ruby Holloway; brothers: Robert, Leonard, Clay and Raymond Holloway. Edna is survived by six children: Danny Boyer of Birch Tree, MO, Mike Boyer of Birch Tree, MO, Teresa Boyer of Birch Tree, MO, Billy Boyer of Killeen, AL, Tina Hopper of Birch Tree, MO and Gary Pogue and wife Ruth of Salem, MO; four siblings: Judy Pruitt of Fenton, MO, Jerry Holloway of Arnold, MO, Tommy Holloway of Imperial, MO and Bill Holloway of Salem, MO; many grandchildren and great-grandchildren; as well as several nieces, nephews, extended family and friends. Edna was an inspiration to all who knew her. She will be deeply missed and dearly loved. She will be in our hearts forever.

Edna Louise (Holloway) Albert was born on March 18, 1944 in Fairmount, Georgia to Earl Gene and Ruby (Few) Holloway and passed away October 21, 2019 at her home in Salem, Missouri at the age of seventy-five years. Edna grew up in the... View Obituary & Service Information

The family of Edna Louise (Holloway) Albert created this Life Tributes page to make it easy to share your memories.

Send flowers to the Albert family.