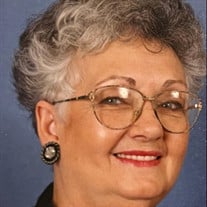 Ella Marie (Clayton) Mayfield, Joan as most knew her, was born June 3, 1938 in St. Louis, Missouri to Robert Lee and Ruby Christine Clayton and passed away February 14, 2022 in Viburnum, Missouri at the age of eighty-three years. Joan was united in marriage to the love of her life, Jesse Berlin Mayfield Jr., December 23, 1954 in front of a Justice of the Peace at his home in Mississippi. Joan always mentioned she remembered the Justice’s kids watched Superman on TV while their marriage ceremony was performed. Jess and Joan were the proud parents of three children: Robert Lee, Lance, and Mark. Joan became a widow at the age of thirty-six when a construction accident took the life of her husband, Jess and just three years later she lost her son Robert in an auto accident. Joan never remarried and raised her boys working multiple jobs. She worked at the local bowling alley in the late 70’s and the Viburnum Drug Store before she became a full-time custodian at the Viburnum Elementary School where she retired from. Joan became an avid bowler and bowled competitively in many local, state and national tournaments. She was also very involved and served on many local and state bowling associations where she held a variety of leadership positions. Joan was an instrumental leader of the local youth bowling league where she dedicated a lot of time and her own resources. Joan loved to line dance, anywhere she and her friends could line dance into the wee hours of the night. She even made it to the famed Mickey Gilleys in Texas. Clogging was another passion of Joan’s. She danced with the Country Cloggers of Viburnum for many years traveling all over the region to clog including Silver Dollar City, the Missouri State Fair and Washington D.C. She always looked forward to the hometown Old Miners Day clogging where she clogged with her granddaughters and hometown friends. Joan most enjoyed time spent with family, nothing brought greater joy than making memories with her grandchildren. Joan started a family tradition in the early 80’s of making enchiladas for Christmas Dinner, when she was no longer able to continue that herself, her daughter in law Cheryl picked up and continues the tradition. Joan was Baptized on June 4, 1979 and was a member of the Mt. Pleasant United Baptist Church in Goodland, Missouri. She was also a very proud member of the Red Hatters Club and enjoyed the friendship of all the ladies. The group dressed up wildly in their red hats and attire traveling many places and becoming a topic of conversation at each place they ate out. Joan is survived by her sons: Lance Mayfield and wife Cheryl and Mark Mayfield and wife Edna; one sister: Sharon; grandchildren: Justin Lee Mayfield, wife Jennafer and son Barrett, Lacey Marie Willis and son Weston, Paige Ann Farr, husband Ethan and son Brooks, Jessica Overall, husband Brandon, daughter Brooklynn, son Deagan, Ryan Mayfield and wife Kourtni, and Marissa Mayfield. Preceding her in death were her parents, husband: Jess, son: Robert, and siblings: Debbie Ortega, Alfred Clayton, and sister Emma Goins. Joan was very independent; some would say a little hardheaded but she was a loving mother and grandmother who adored her sons and grandchildren. She worked hard, she made the most of widowhood and it was a life well lived. Funeral Services for Ella Marie “Joan” (Clayton) Mayfield were held Friday, February 18, 2022 at the First Baptist Church in Viburnum, Missouri with Pastor Justin Perry and Bro. Mike Morton officiating. Song selections played were “When I Get Where I’m Going”, “The Dance”, and “I Hope You Dance”. Serving as Pallbearers were Lance Mayfield, Mark Mayfield, Justin Mayfield, Ethan Farr, Andy Skiles, and Danny Gladden. Burial was in the Mt. Pleasant Cemetery in Goodland, Missouri. Arrangements were under the direction of Wilson Mortuary of Salem, Missouri. In lieu of flowers, Memorial Contributions may be made in memory of Joan to the “Love Thy Neighbor” fund and left at Wilson Mortuary.

Ella Marie (Clayton) Mayfield, Joan as most knew her, was born June 3, 1938 in St. Louis, Missouri to Robert Lee and Ruby Christine Clayton and passed away February 14, 2022 in Viburnum, Missouri at the age of eighty-three years. Joan was united... View Obituary & Service Information

The family of Ella Marie "Joan" Mayfield created this Life Tributes page to make it easy to share your memories.

Ella Marie (Clayton) Mayfield, Joan as most knew her, was born...

Send flowers to the Mayfield family.